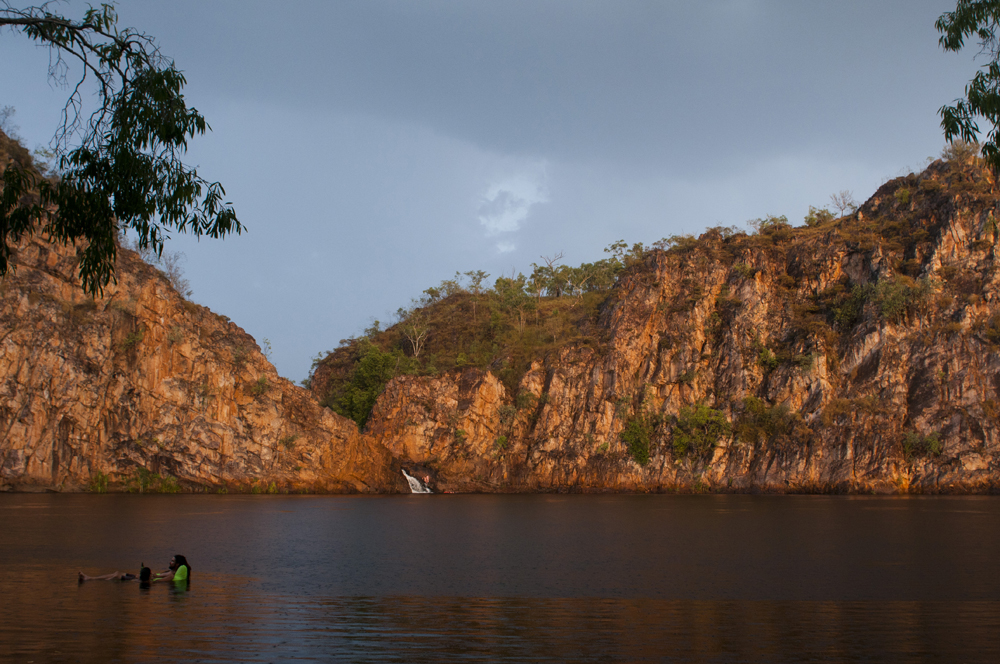 Sunset and an early Wet Season shower over Edith Falls

It’s been almost a month since the last instalment of our trip and over two months since it actually all happened. Seems then, there is a lot to catch up on. I’ll try and stick just to the interesting parts then. 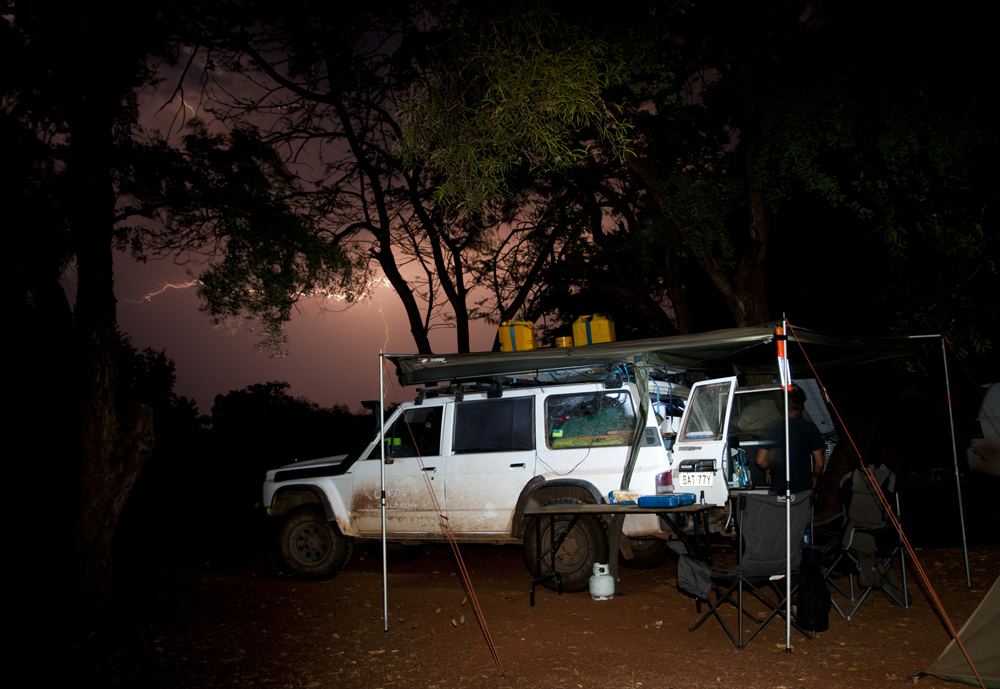 A lightning storm over Elliot

From Darwin, we drove to Uluru. You may not realise it, but from Darwin to our iconic monolith (which I learnt on Getaway last night, is actually lying on its side after it fell over once), it is just short of 2000km. Even from Alice Springs, the main Outback centre in the NT, it is over 450km, so is in the middle of absolutely nowhere and between these three iconic Australian destinations, there isn’t much else. Some of the less memorable stops are the little town Elliot, and being slugged $2.2o/L for fuel at Curtain Springs. Most of the rest of the drive was hundreds of kilometres of red dirt, mulga scrub, hot wind and dry, stinging eyes. We’ve done a lot of great things on this trip, but that drive wasn’t one of them. 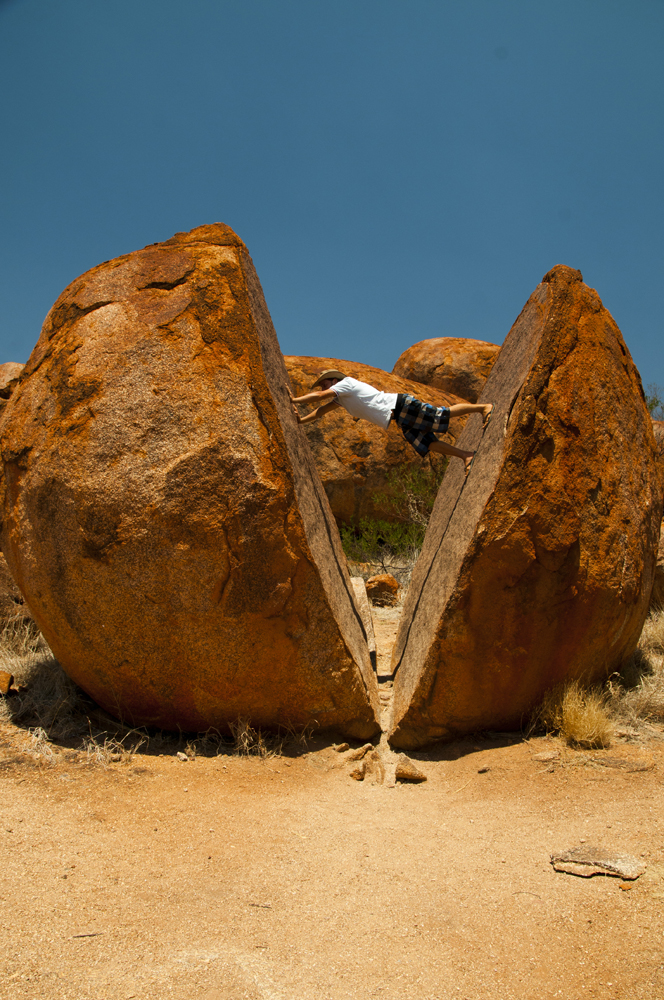 One of the Devil's marbles

There were a few interesting detours though. Edith Falls, not far north of Katherine was pretty special. Situated on the Edith River, a large plunge pool is fed by a small waterfall and surrounded by an impressive ring of sandstone cliffs. It’s one of those monitored Northern Territory Rivers that are totally accessible to crocodiles, but the park rangers kick them out before us tourists turn up. It gets pretty deep and dark very quickly though, so it is pretty hard to feel comfortable. We got some of the first rain of the Wet Season there too. Sitting outside cooking dinner, some dark clouds came over threatening a short shower. The short shower quickly turned into a heavy downpour. flooding parts of the campground and catching us pretty unawares. It was a welcome, if momentary, relief from the heat though.

A camp visitor near Katherine

Nothing interesting happened between there and Alice Springs. 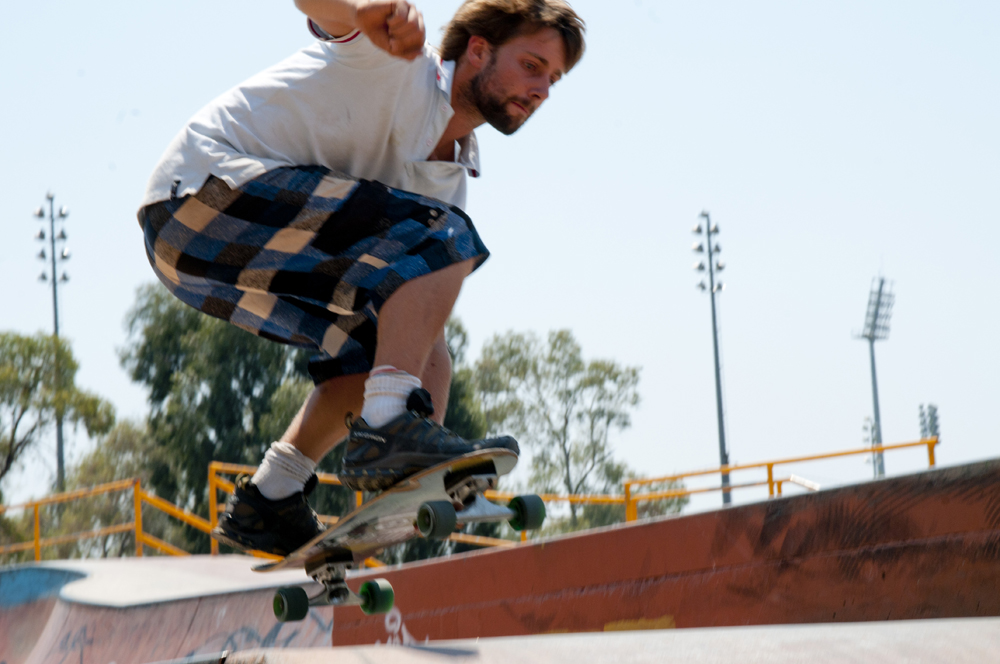 With nothing else to do in the Middle, the councils build pretty rad skate parks

Alice, at sunset, is one of the most stunning cities I have ever visited. The modern, bustling township, with it’s big supermarkets and fast food chains is plonked right in the middle of the MacDonnell Ranges, a sort of oasis in the heart of nothingness. Red mountains, spotted with eucalypt and desert scrub, lit up by the dropping Australian sun, contrast spectacularly with the billboards, traffic lights and MacDonald’s restaurants. It can really take your breath away, until the sun goes down. That night, the police walked through our campsite with dogs and torches and serious looks. Apparently that isn’t uncommon. We left the next morning. 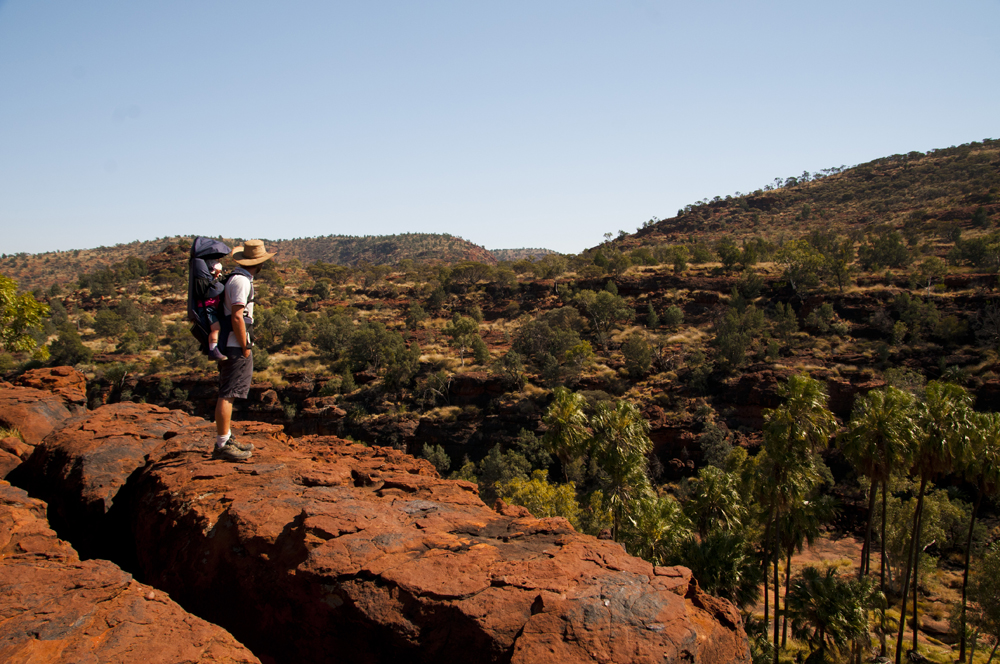 Looking out over Palm Valley, just before River cracked it.

We headed west out of Alice, into the sunset (which is totally poetic, because it was still in the am and the sun still behind us) and made for Palm Valley. Palms are not a common sight in the outback, which is partly why Palm Valley is so out of the ordinary. Populated by the Central Australian Desert Palm, a vulnerable species of plant found only there, they line the banks of the Finke River and rest in the shade of a towering red, sandstone valley. We started a walk around the valley, but were turned back after only a kilometre, when River decided that her baby backpack was the worst place on earth and tantrumed till she almost couldn’t breathe. 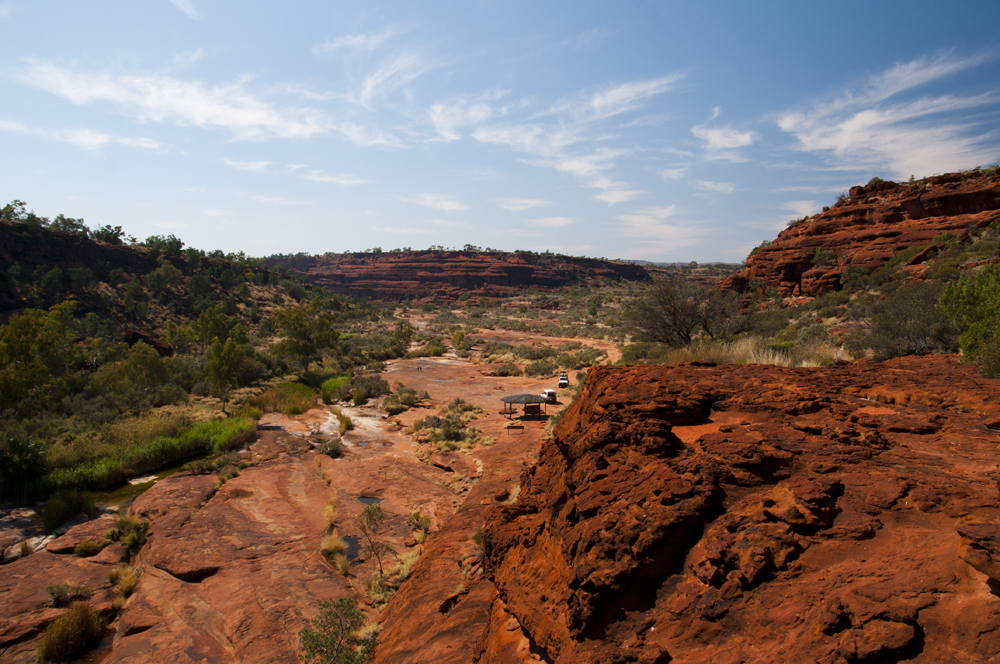 From Palm Valley, we had planned to take a rough, but worthwhile shortcut due south through the ranges. The 50km track was estimated to take us four hours, but covered some pretty special company. Turns out it was closed due to fire damage, so we had to travel an extra 400km out of our way and pay for a vehicle permit to do it. The road is known as the Mereeni Loop and you’ll find it recommended in many 4WD guide books. Considering that between Palm Valley and Kings Canyon, there is nowhere you are allowed to, or would want to stop, it was a rather uneventful detour. 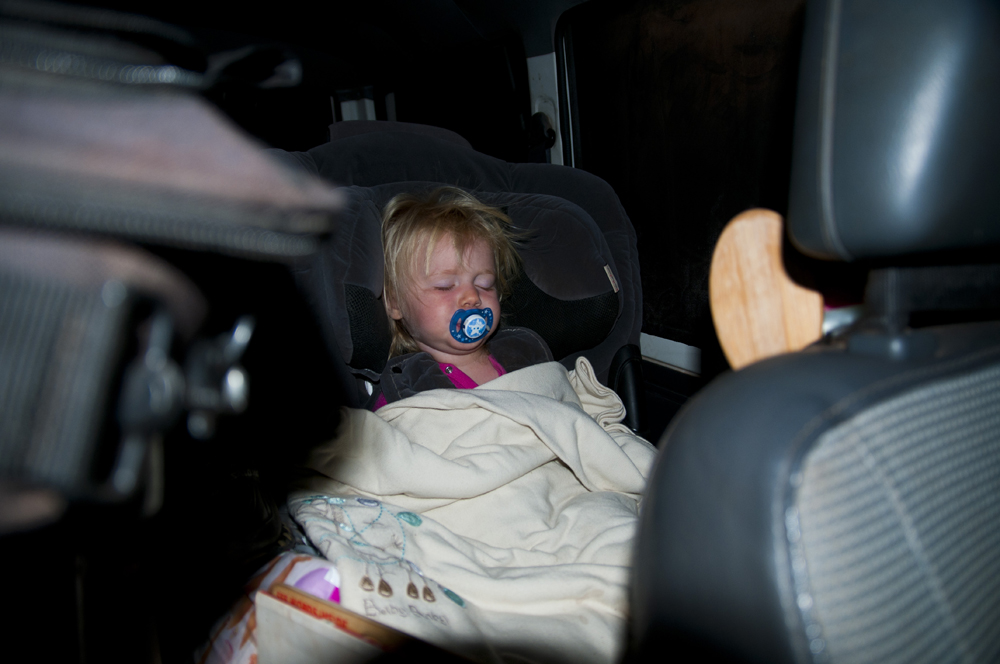 River, obviously excited to be up at 5am for sunrise over Ayers Rock 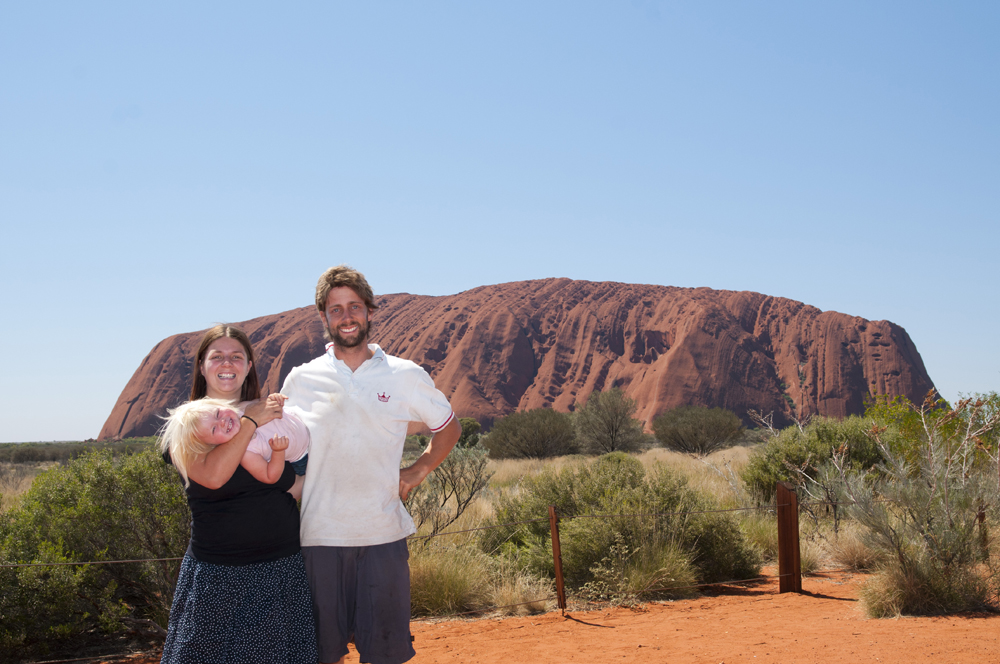 Uluru. Next to the Harbour Bridge and Sydney Opera House, it must be the most iconic Australian landmark anywhere in the Australia, even the world, and it definitely isn’t next to either of those. By the time we finally made it to the big rock, the sun was setting and the car parks were full. According to a report by Tourism NT, 297000 people visited Uluru in 2010 (by comparison, Kakadu NP only got 175000 through the gates), although it is unclear whether that estimate includes kids under 16 who don’t have to pay for a ticket. I reckon that many people were there the afternoon we rolled up, all trying, like us, to get that iconic photo. Say what you will about clichés though, the monolith is suitably impressive. The following day we checked out the climb and after standing at the base and looking up, I was more than half relieved to see that it was closed. Ayers Rock is tall, steep and foreboding and it is small wonder that 39 people have died trying to climb it. One of the most enlightening (yet possibly embarrassing) things, was to discover the rock is not oval shaped, as it appears in most pictures. It looks, from above, a lot like a pair of undies, or for the more romantic, an ancient spear head; some describe it as a heart, the ‘heart of Australia’. 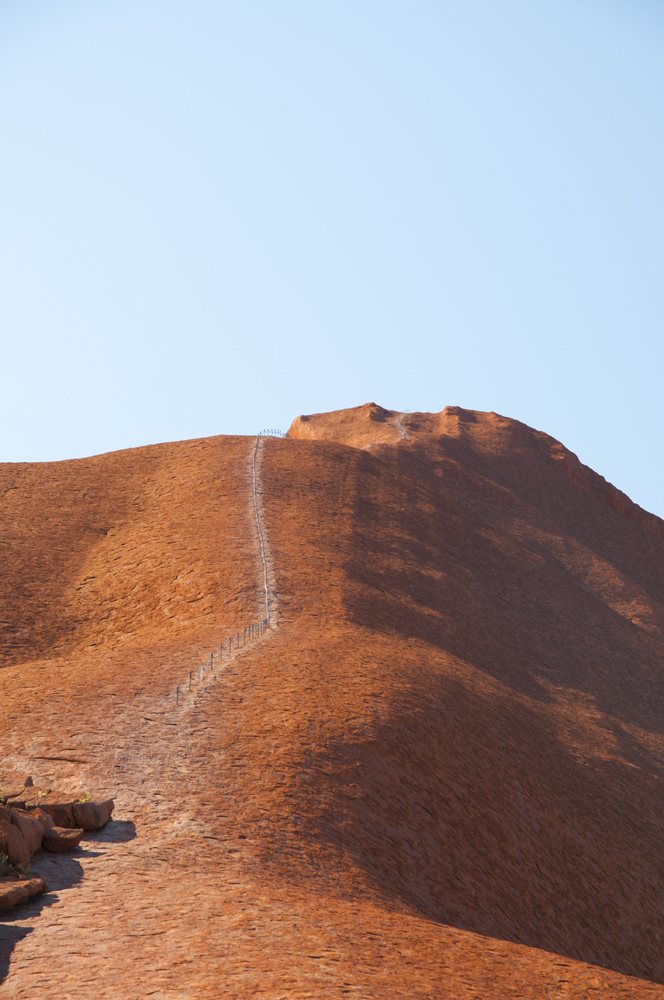 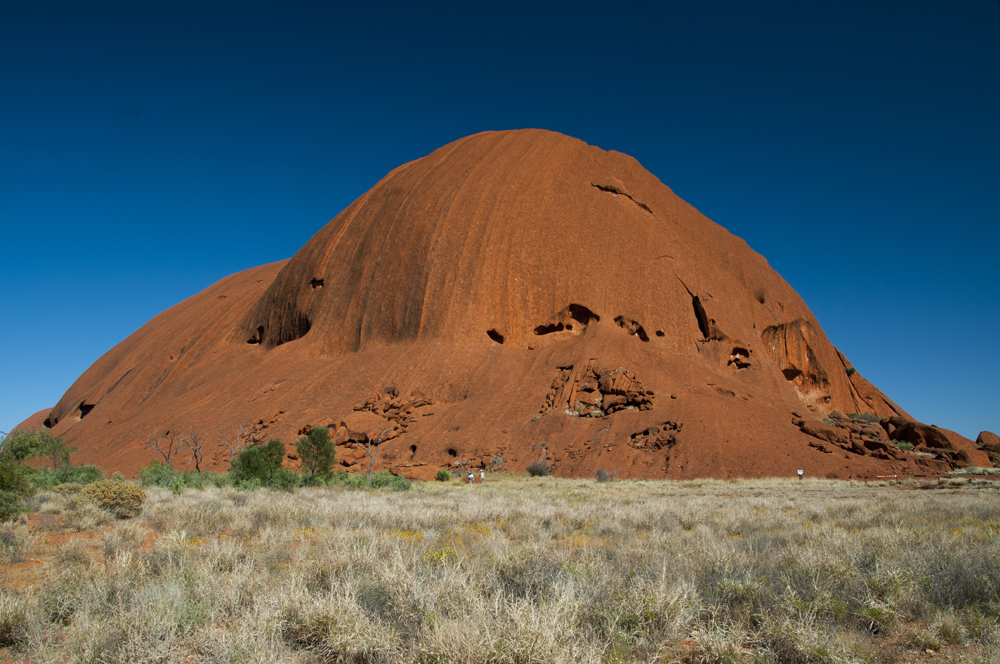 One of my favourite pics of Uluru 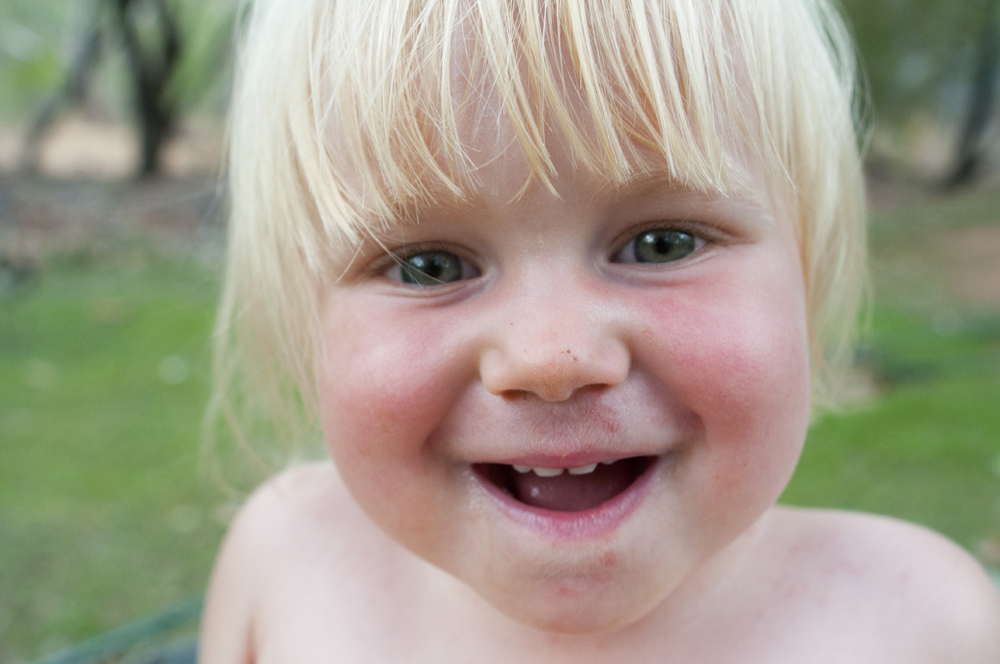 From Uluru, we drove to Adelaide. 1600 or so kilometres where the most interesting experiences was running out of money in Coober Pedy and camping between a train line and highway near Port Augusta. We did meet a noteworthy family at a campsite near Adelaide though. With four kids, a bus, a Pajero, a caravan and a boat, they had been travelling around Australia for three or so years. They lived in the bus for the most part, which towed the caravan when they moved. The van was essentially their shed, which stored essentials, like a generator, tools, go-karts (x2), a washing machine and two electronic barbie Jeeps. Because there was six of them and the bus didn’t fit in a lot of car parks, the wife drove the Pajero behind the bus. Behind the Pajero they had a sailing dingy, a small yacht, which looked like a lot of fun. Not one of the six knew how to use it though, they only bought it to put the kids toys in, the ones that didn’t fit in the bus or the caravan or Pajero. Buzz Lightyear and Woody have never seen so many toys; the boat was full!

From Adelaide we flew back to Sydney for the wedding of Mr Chris and Claire Kelly, but not before we were caught in the midst of Adelaide’s earthquake. Don’t stress to much for our wellbeing, we survived. Measuring in at 3.3 on the Richter scale and lasting for five seconds, it was a surreal experience. For Angela and I, the details are hazy; it was almost like we slept through the whole thing and then heard about it later on the news, but maybe that is just the our self-conscience protecting our fragile minds from the horror, it’s hard to tell.

I don’t want to dwell on such dark matters, so the rest of our adventure will be uploaded later.