Angela 15 January 2012 South Australia No Comments on When adversity strikes…. 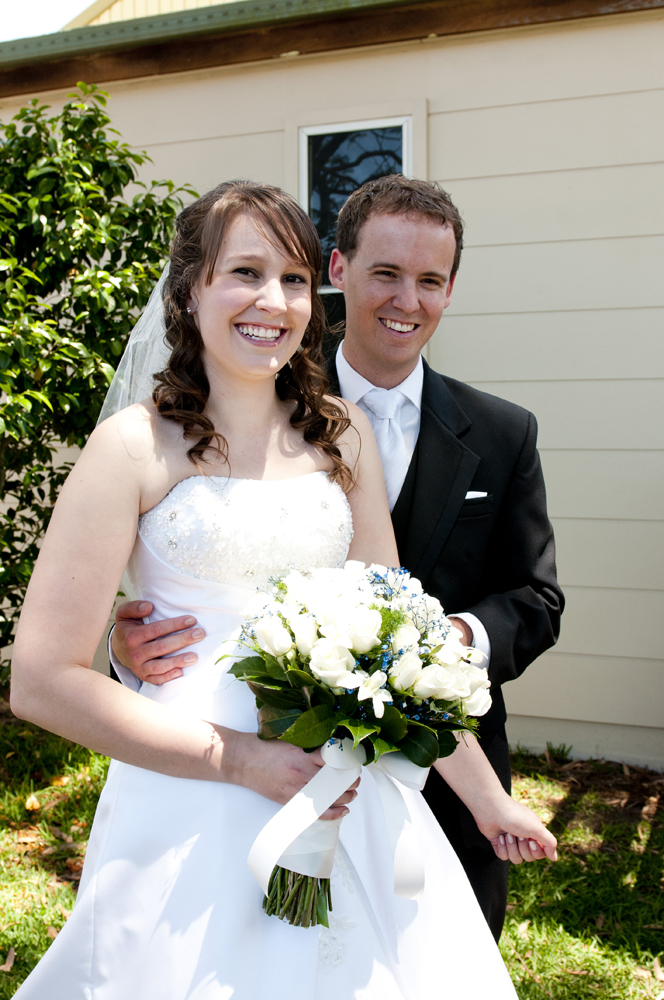 We left you last time on our way back to Sydney where we were lucky enough to celebrate the wedding of our good friends Chris and Claire. It was a very busy 2.5 weeks with bucks and hens celebrations, suit fittings and all of those other little appointments that come with the final preparations of a wedding. In the end a fantastic day was had by all. The bride looked stunning and even the groom managed to scrub up alright. As best man Brendan was required to write a speech and I am pleased to say that it wasn’t even boring. I think it even drew a few tears from the crowd.  River obviously doesn’t take after her father from the way she kicked it up on the dance floor all night too. 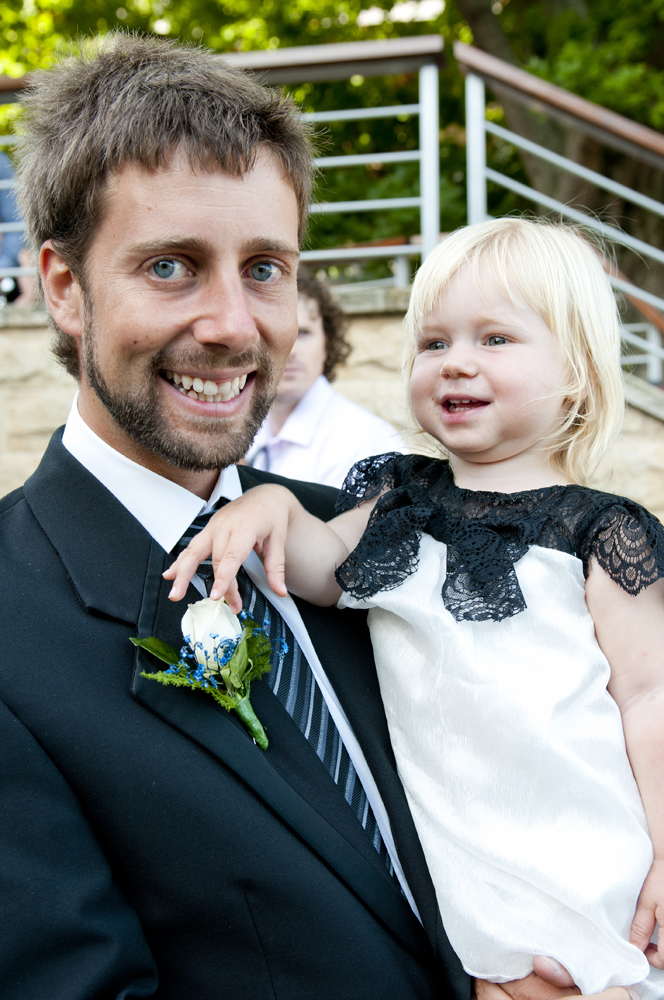 As much as we love visiting home, our car was still waiting for us back in Adelaide, accruing quite a hefty parking fee at the airport, so back we flew after all the celebrating was done and got ready to conquer the Southern stretch of our journey. 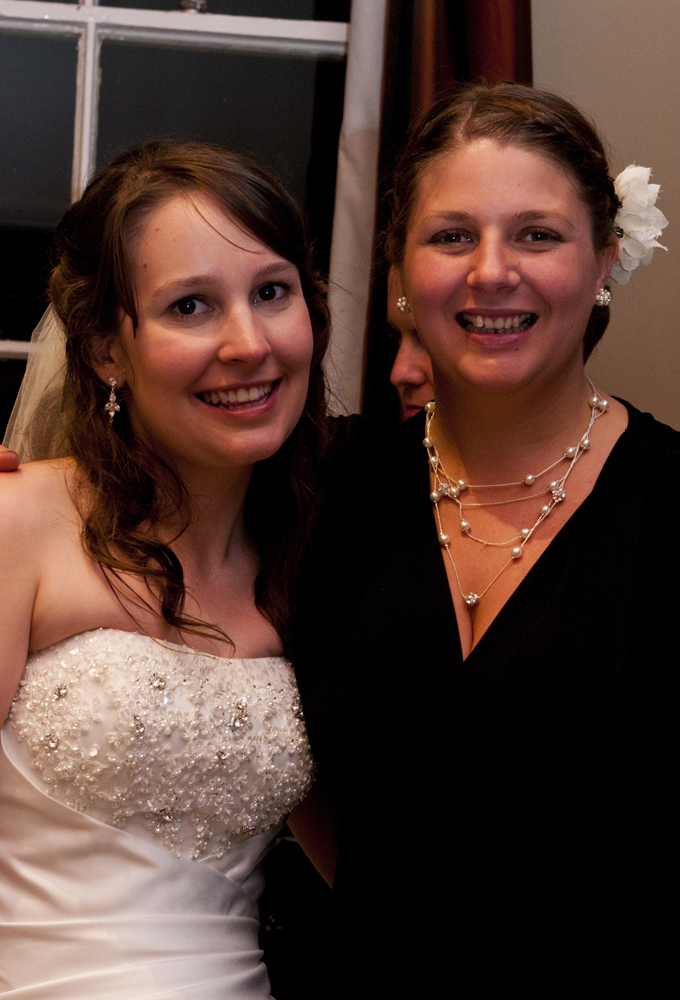 According to their very own webpage South Australia is home to long summers, stunning beaches and award-winning wine. Not to mention the beauty that is the Flinders Ranges and iconic Kangaroo Island. There is Adelaide Zoo, home of the only 2 giant pandas in the southern hemisphere as well as its sister park, Monarto Zoo which is now the world’s largest open range zoo. There are numerous petting farms scattered across the region, perfect for the youngins, and for mum there is more than a few delectable looking chocolate factories which offer tours and (more importantly) tastings! 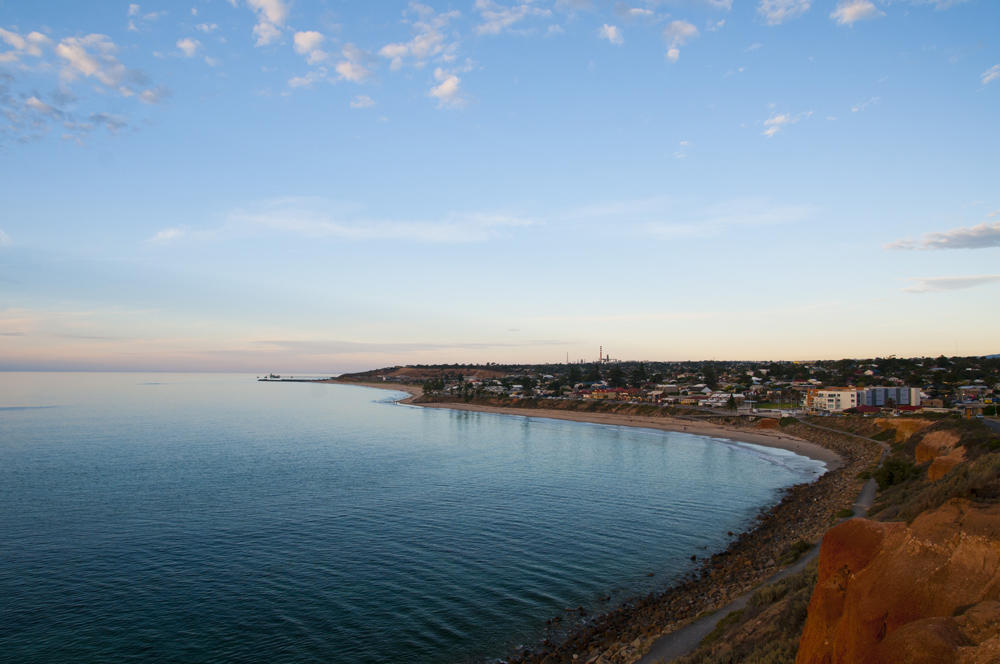 Sounds like some kind of fairytale land where dreams come true and everyone ends up happy as a hippo right?

Unfortunately when your car fails rego, the weather turns sour, your camping gear decides to pack it in all at once and the youngest member of your family gets the worst cold of her life you aren’t really left with many opportunities to get out and experience the above named wonders… 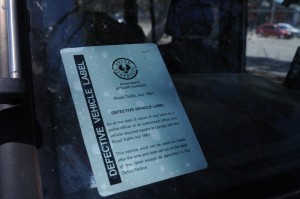 As mentioned by Brendan in our previous post (Brendan’s top tips on getting stuck in Adelaide) we had more than a little trouble getting our car registered out of state. It took a whole lot more time and money than expected which left us pretty much stranded at the Christies Beach Caravan Park for close to 3 weeks while we sorted everything out.  Not a bad place to be stranded with the beach on our doorstep and the shops only a 5 minute walk away but poor Brendan must have spent most of each day bending a bit of wire here and lubricating something there just to get our seat belts retracting 1 second faster and our demister blowing a fraction harder so we could finally pass and send off our papers to Sydney. And to top it all off the surf wasn’t even good!  But pass we did and in celebration we headed out on the town to the Coopers Alehouse on Putney street where you can order a Schnitzel bigger than your head and top it with the most delicious things you can imagine such as bacon, cheese and Worcestershire sauce!!! Mmmmmm yummmmmmmm.  We even shared with River and still managed to bring home what was basically a whole schnitzel. Made for some awesome toasties at lunch the next day. Highly recommended!!!! 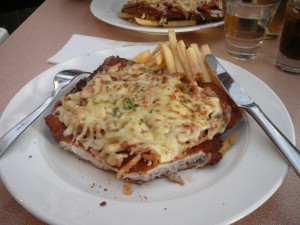 Yep – That’s a schnitzel as big as a dinner plate!

Meanwhile back at camp, due to the atrocious 45km/h winds blaring through the park every morning, afternoon and night, our ever trusty awning managed to flip back on itself and snap an arm despite the use of every rope and peg in our kit. We resorted to the good old fashioned tarp only to have 2 of our poles decide to die on us as well. Luckily we have spares! Our chairs blew over at every opportunity, River was beginning to resemble her uncle Wesley with his head full of golden dreadlocks and anything left out on the table was likely to be 3 suburbs away within 5 minutes of turning your back. Not to mention the fact that Brendan’s thongs popped both their plugs and our 4WD mat cracked a seam and was now more like sleeping on a flat pancake than an actually mattress.  River and I found ourselves spending a lot of time couped up inside the tent.

It wasn’t all bad though, due to the fact the caravan park only offered powered sites River got a treat and was able to enjoy the company of finding Nemo and the Aristocats whilst I took the opportunity to finally pick up the ‘learn to knit’ book I had been given the previous month. For a first time effort I think I did pretty well to smash out half a scarf with only 2 holes, even if I do say so myself.

Another bonus to the bad weather was the extra time spent congregating in the camp kitchen around meal times. Even if you are all set up in your RV with the gas stove and the digital tv I suggest you switch it off at meal times and head out to find the camp kitchen if it’s offered. They are a great place to meet new people and maybe even make some great friends. 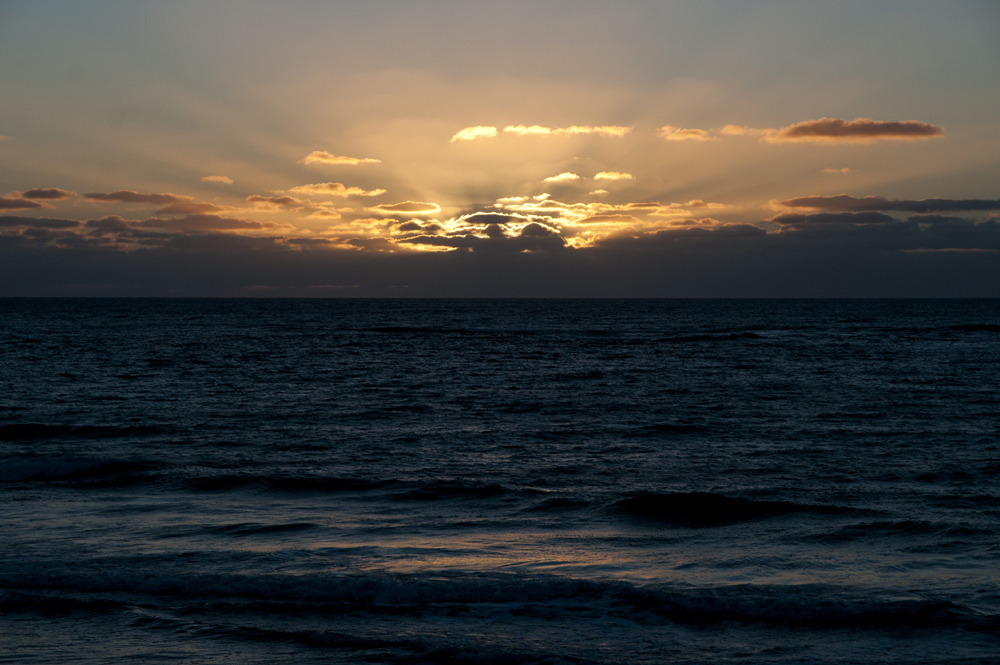 We were fortunate enough to befriend 2 young families during our time at Christies Beach. Both vegetarian and highly motivated to save our good planet’s resources in whatever way they could. It made for some very inspiring late night conversations and left us with the urge to find a patch of grass and plant a vege garden. Their freshly baked bread and vegetable soup was almost enough to turn us from our meat eating ways… almost. Brendan was rather excited to find that one of our new found friends Ryan shared his love of the surf and they spent quite a bit of time together attempting to catch a good wave.  I was also extremely glad to see that second surfboard of Brendan’s finally getting some use as having just moved from the UK with his wife and daughter Ryan hadn’t had time to find his own yet. 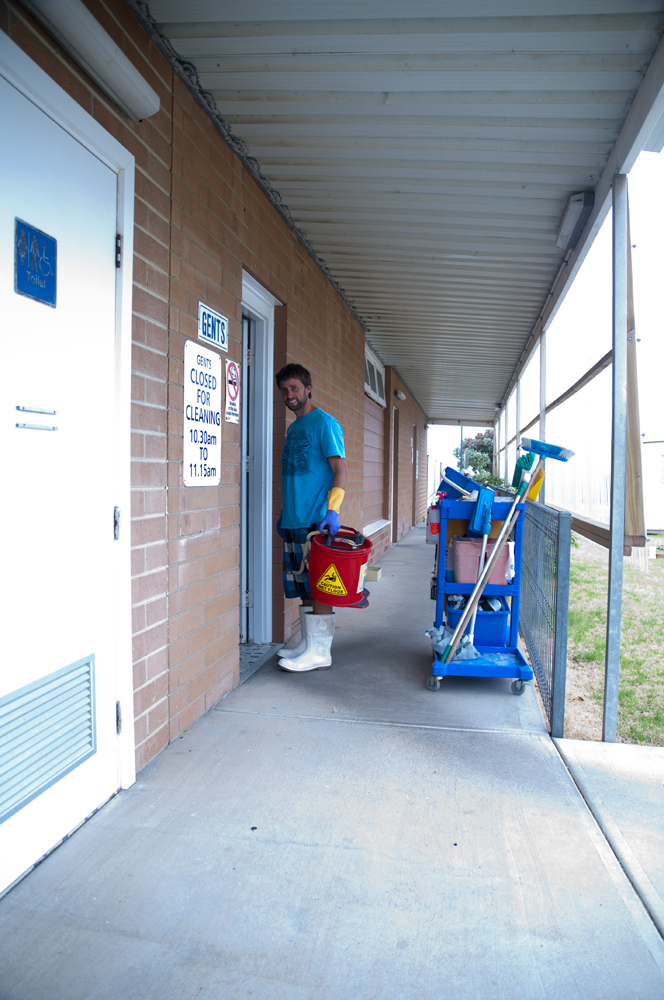 It was also thanks to Ryan and his wife Keean that we managed to score a week of free accommodation. Ryan was the regular cleaner for the caravan park but due to visa requirements for his UK born wife they had to leave the country in order to have everything approved. So off they flew to Bali while Brendan took on the job of toilet cleaner. Not quite what he had in mind at the start of this trip when he said he’d like to spend a bit of time working our way around but for free accommodation even toilets are worth it!

Alas, with our car now officially roadworthy and registered we had no further reason to stick around (nor did we want to to tell the truth) so we farewelled our friends and headed south towards Victor Harbour and the Fleurieu Peninsula. We had great plans for this part of the country. The weather forecast looked promising and even the surf was meant to get better. The historic horse and carriage ride at Victor Harbour was looking very attractive as an outing and the little petting zoo down the road and the adventure park in town had caught our eye as well. 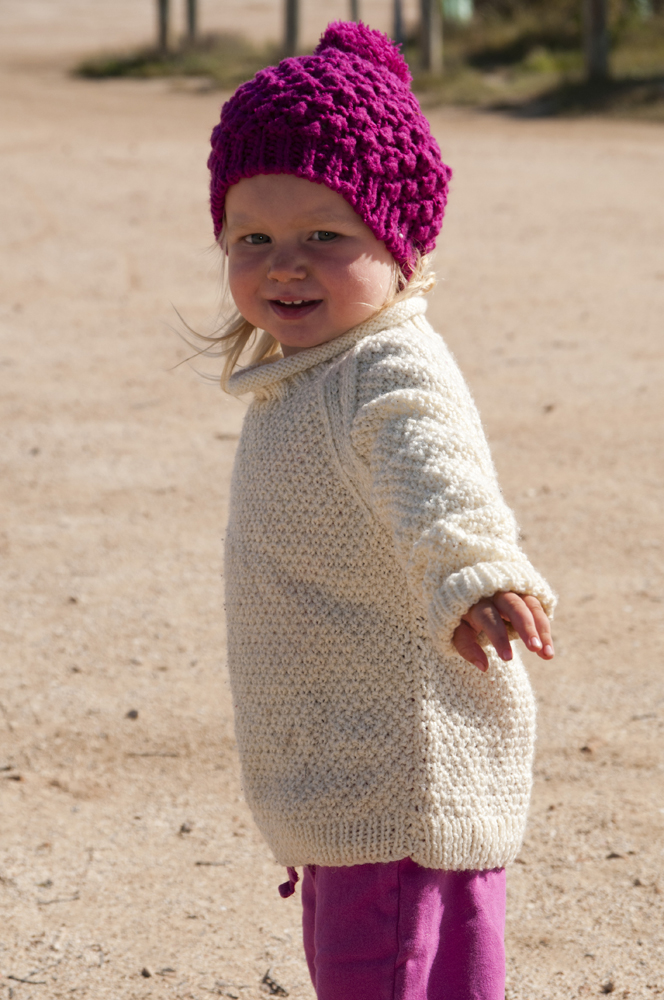 River seemed to have other ideas however and it was at this stage of our trip that she managed to catch a terrible cold and spent 3 days only wanting cuddles and sleep time.  There is nothing quite as hard as watching your little one feeling terrible and not being able to do anything for them. As well as that the wind didn’t appear to be letting up but now had the added force of arctic temperatures behind it AND the surf was still crap! By the end of the 3rd day with no real improvement in River’s health or the weather, our bank account was quickly drying up, we were using a skateboard as a seat having broken one of our camp chairs packing up, our mattress still flat as a tack and basically feeling like our life source had been drained after caring for a very sick little girl 3 days straight we started throwing around ideas for a sudden relocation.

Melbourne was on the cards for Christmas but was also wet and cold. Sydney wasn’t too far to drive but was also having some of the worst weather of the century. Coffs Harbour and Port Macquarie were coming first in the sweeps with pros being good surf and the hot sun. Eventually after much deliberation and a few quick phone calls we decided to pack it all up at 5.30am next morning and spent the next 2 days in the car driving until dark. Our final destination… 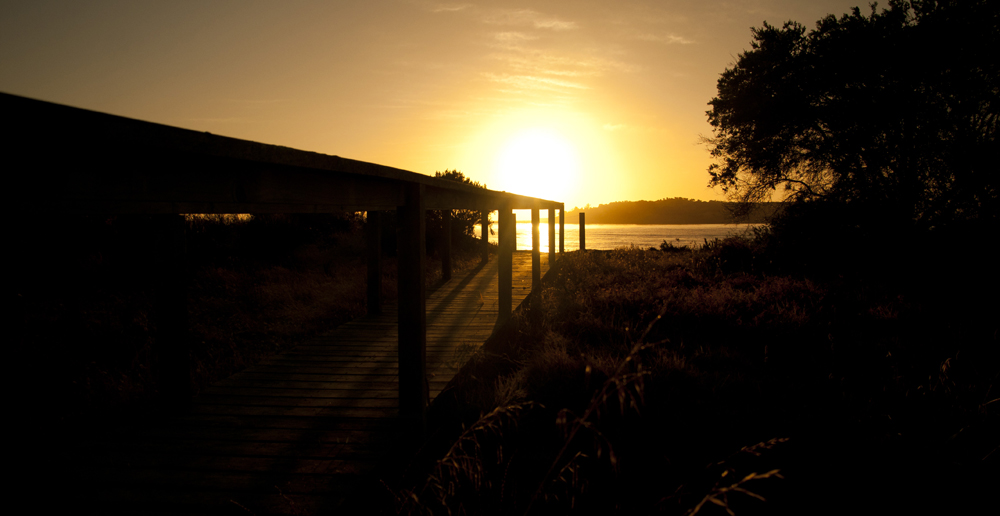 The GOLD COAST.  That’s just over 2,200kms in 2 days or 4 states, 3 time zones and a whole lot of farm land.  Some might call it crazy but we consider it to be one of the best decisions of our whole trip. Within a day of being out of the wind River started to get better. I saw Brendan smile for the first time in weeks and I got to spend time with my mum and dad as we were staying at their place in Elanora.  Although we were sad to miss out on all we had planned for SA we managed to have an awesome 2 weeks of sun, surf and crocheting instead! One day im sure we will all go back and have the time of our lives. Until then though… Enjoy the gallery!!