Batty 26 October 2011 Northern Territory No Comments on Why Darwin is Better than Sydney (or Melbourne, Canberra, Adelaide and Brisbane)

And maybe even Perth, but we haven’t been there yet to judge.

The Northern Territory is short on people, especially people that might stick around for a while, get jobs in their growing economy and have kids who will boost the population even more. The problem is, Darwin is right at the top of Australia, it is hot in winter and stifling in summer. They get nearly 2000mm of rain in 3 months and probably a cyclone or two to keep things interesting. On top of that, they are isolated, so everything but mangos are expensive and if you don’t like fishing, there isn’t much more to keep you interested. 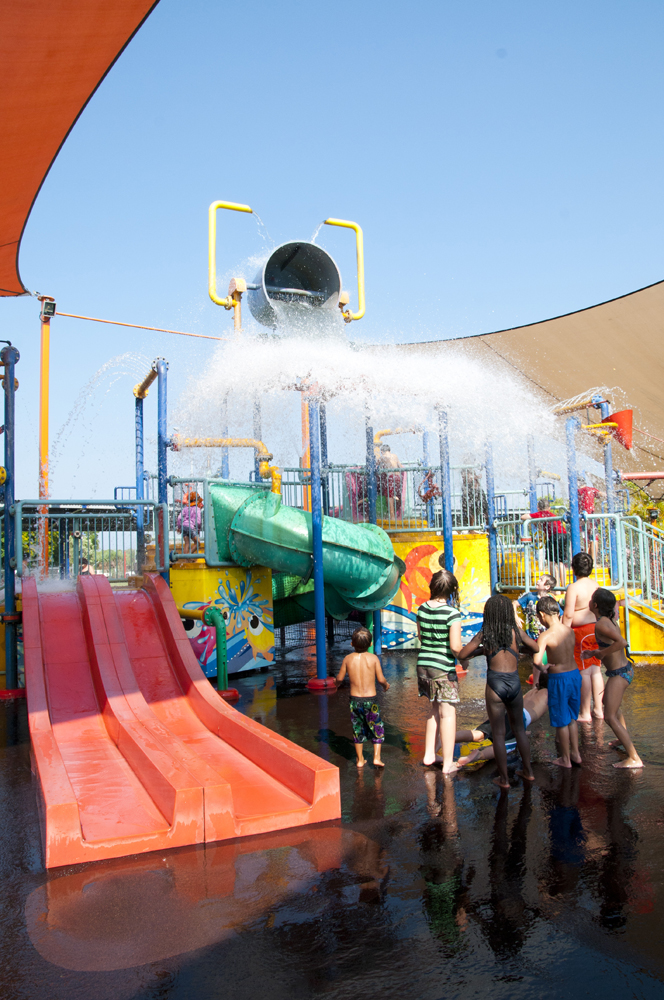 So they build places that guys like me, with wives like Angela and kids like River think are awesome, so we will think Darwin is rad and consider moving there. We won’t, probably.

But, welcome to Leanyer Recreation Park, an initiative of the Northern Territory Government.

Leanyer very quickly became our favourite place. We went there instead of Kakadu once. Essentially it is an outdoor aquatic centre. If you ever went to the Homebush Aquatic Centre in Sydney not long after it opened and remember how exciting it was to go somewhere that wasn’t a theme park on the Gold Coast with a waterslide, you will be triply excited to know that Leanyer has 7 (seven) and all but one of them are fun. 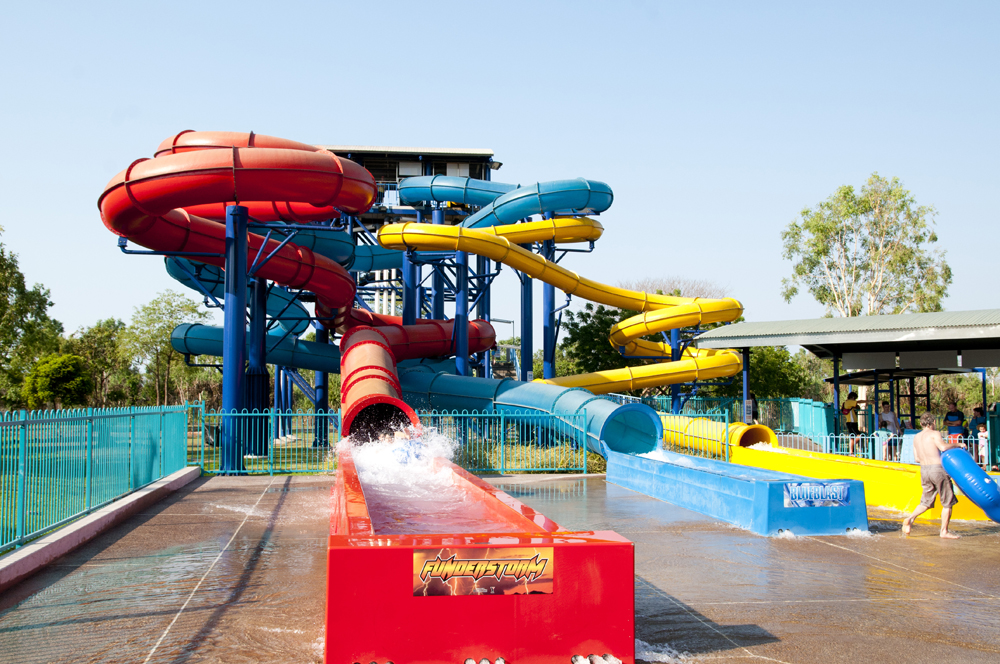 We were told about this place by a few people, but it was our new mate Shai and his wife Anat that convinced us to go.

Anat: Have you been to Leanyer water park yet?

Us: No, we are thinking about it though.

Anat: Well you have to go on the red waterslide together. 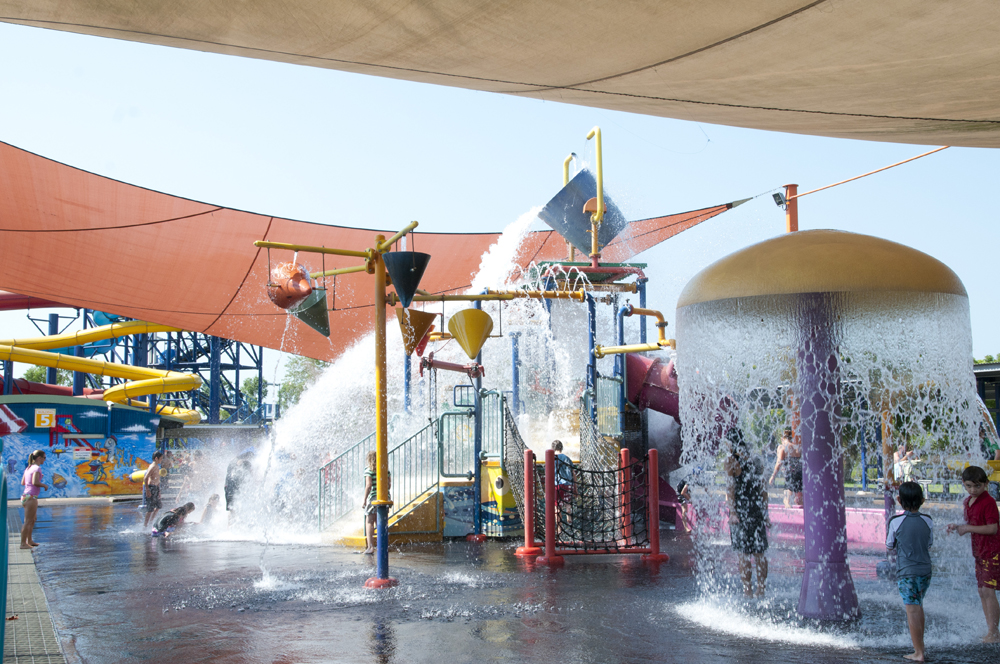 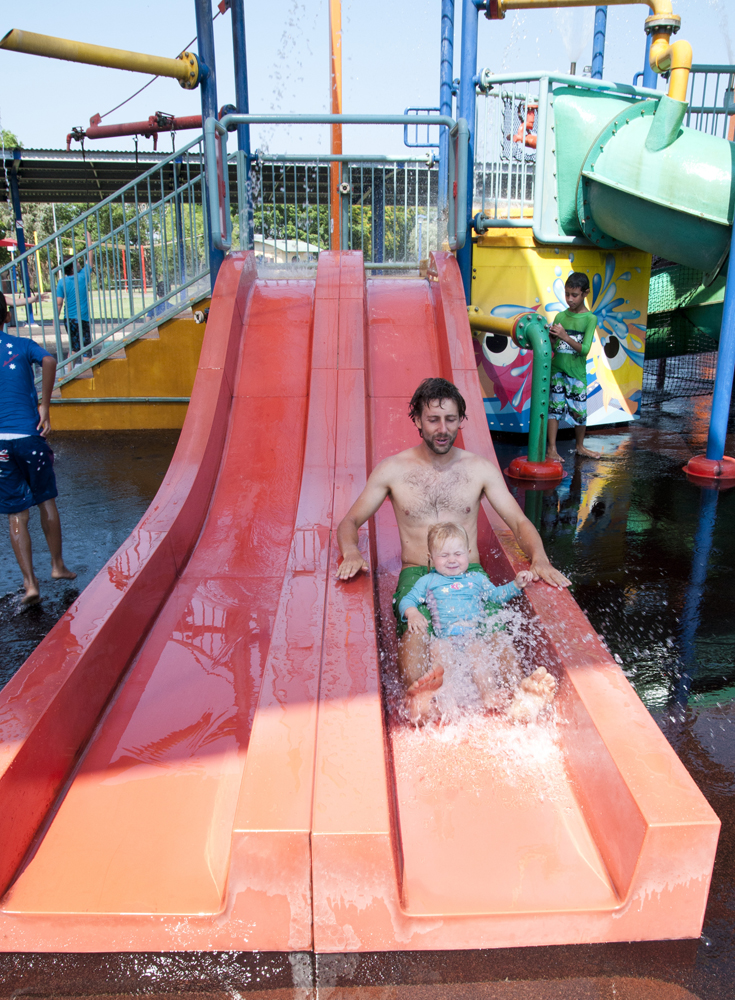 Working ourselves up to the bigger slides

He was right. We left River with a nice couple, Andrew, Rachel and their three year old Evie, (don’t worry, we had met them the day before, briefly) and headed over. Now remember, this is Darwin, so we didn’t even have to wait for the blue rafts you need for this waterslide, and at the top there was only a handful of other sliders on the other two slides, so we didn’t even have to line up. We jumped in, pushed ourselves over the edge and then… nothing.

After the first bend the slide goes pitch black, you trust in the cheap blue raft and gasp as water hits your face from a directions you weren’t sure you were even going. Angela squeaks, I laugh, we both come tumbling out the bottom into a wash of warm water and bright tropical sunlight. There is still no line, so we head up again. This is why Darwin is better than Sydney (or Melbourne, Canberra, Adelaide and Brisbane). There are two other big slides up there. A blue one which is worth missing, and a yellow one which is skinny, fast and puts you through a mad corkscrew at the end giving you no choice but to giggle. We went home with red raw shoulder blades and sore, chlorine affected eyes. 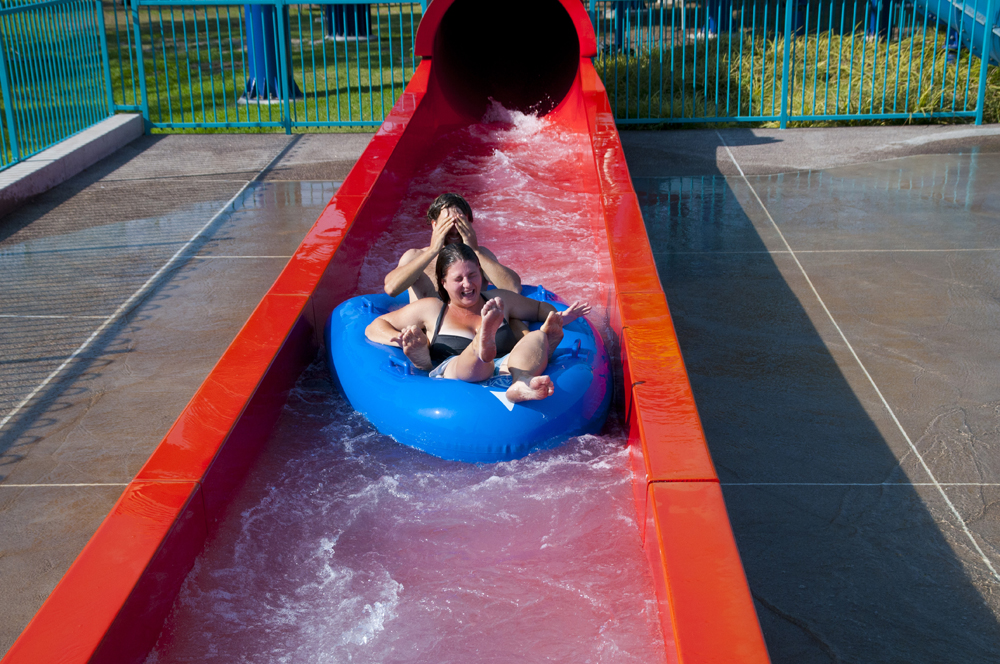 But not before we romped around the kids water playground. Taking up roughly the same space as a soccer field, the water playground is an assault of colour, water, screaming kids and laughing dad’s. Easily the highlight is the 200 gallon bucket of water that tips out onto the waiting hoards every five minutes, just before the mad rush back up the stairs and to the playground’s water slides. You can’t get bored here. 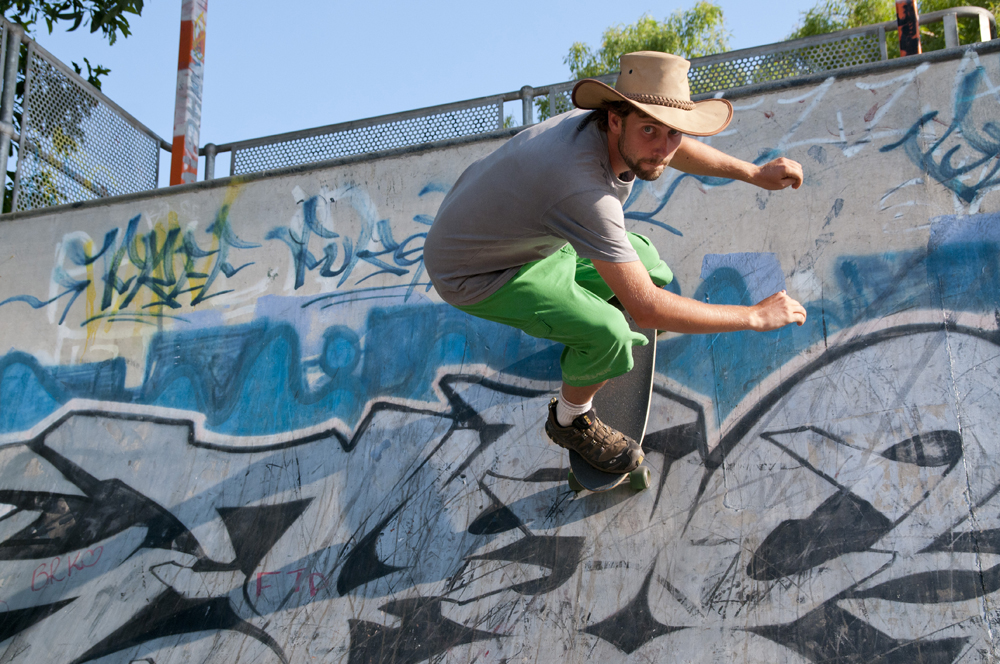 If you fancy a more relaxed pace, then a dip in the pool, (which I estimate to be about 25°C) is almost refreshing, or you can relax in the shade on the super green grass, have a barbie on one of the free barbeques or even stay dry on the massive kids playground. That’s why Darwin is better than Sydney (or Melbourne, Canberra, Adelaide and Brisbane).

But that’s not all. A huge amount of space has been dedicated to the facilities skate park. 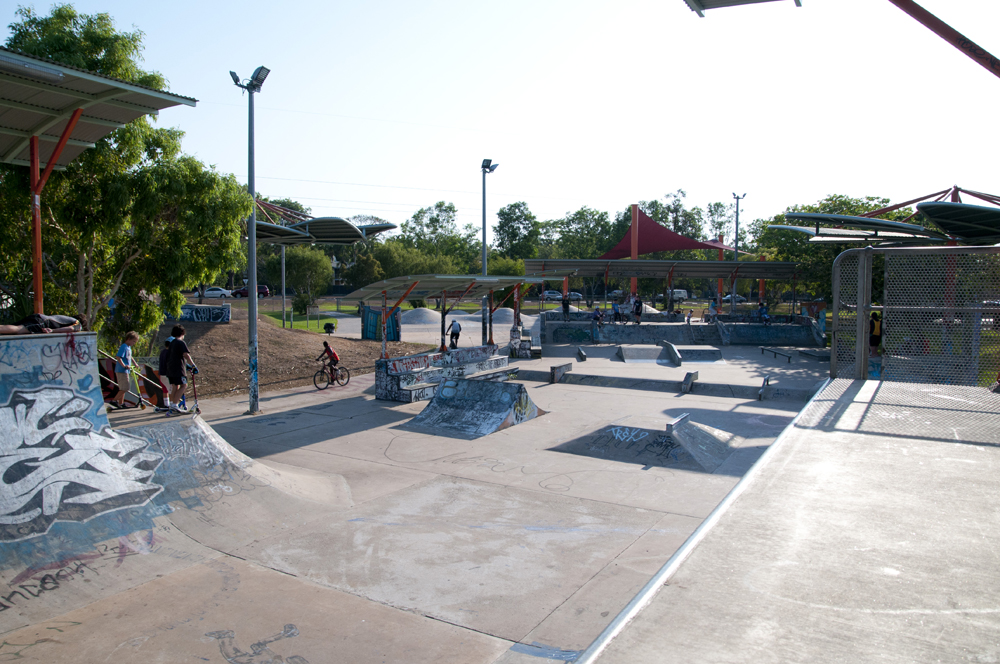 Scooter kids took over this day

I brought a skateboard with me on this trip. Until Darwin, I wondered why. I hadn’t used it once. But as we pulled up to Leanyer, it all became worthwhile. Featuring three different sections, including, but not limited to, a vert ramp, a street section and another with a bowl and roll ins, the distinct lack of punk scooter kids tempted me to don some shoes and see if I could still balance on a 23in piece of timber.

I can, for the most part. One kid did laugh at me when I stacked it off a ramp, but he was riding a scooter, so I didn’t mind. I skated this park at least four or five times. Every time we went to the water park, I would wear myself out (embarrassingly quickly) on my skateboard, then cool off in the almost uncomfortably warm water. It doesn’t get much better. 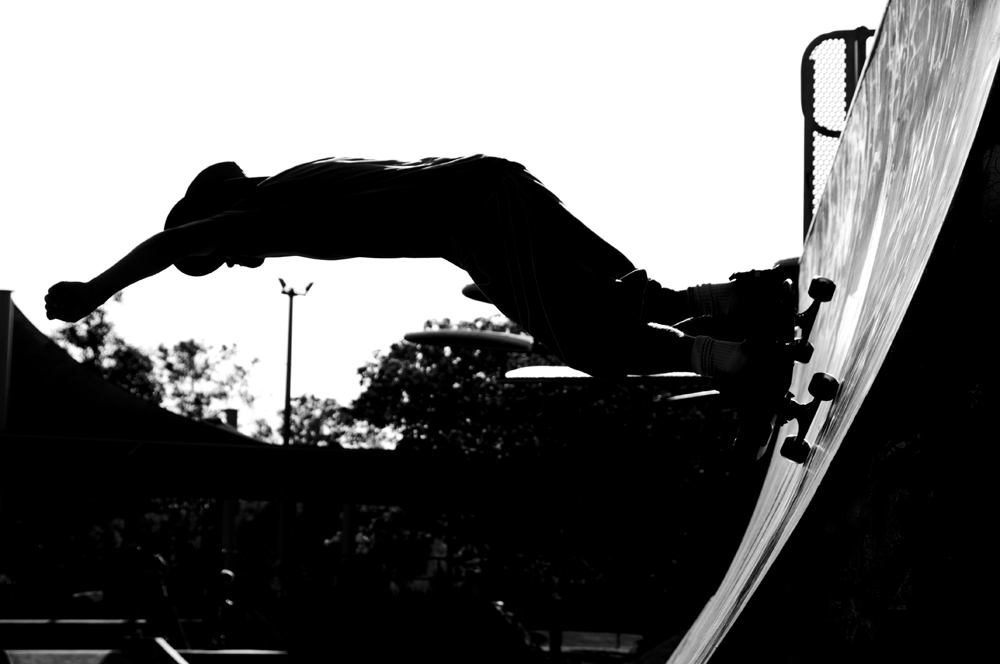 So, Leanyer Recreation Park gets our thumbs up. It is why Darwin is better than Sydney (and Melbourne, Canberra, Adelaide and Brisbane).

Oh yeah, and I forgot to mention it’s free.