Possibly  the most common question we get asked (apart from, “How is River?”), is “How’s the car holding up?” So I thought I would write about it and hope if I ever try to sell it, the potential sucke… buyer, doesn’t read this. 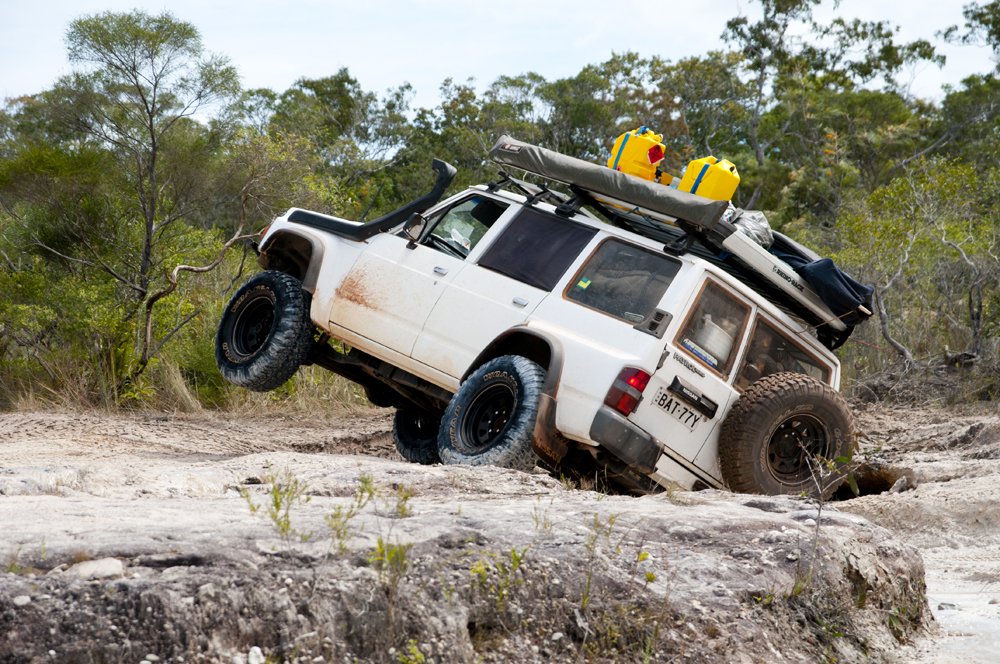 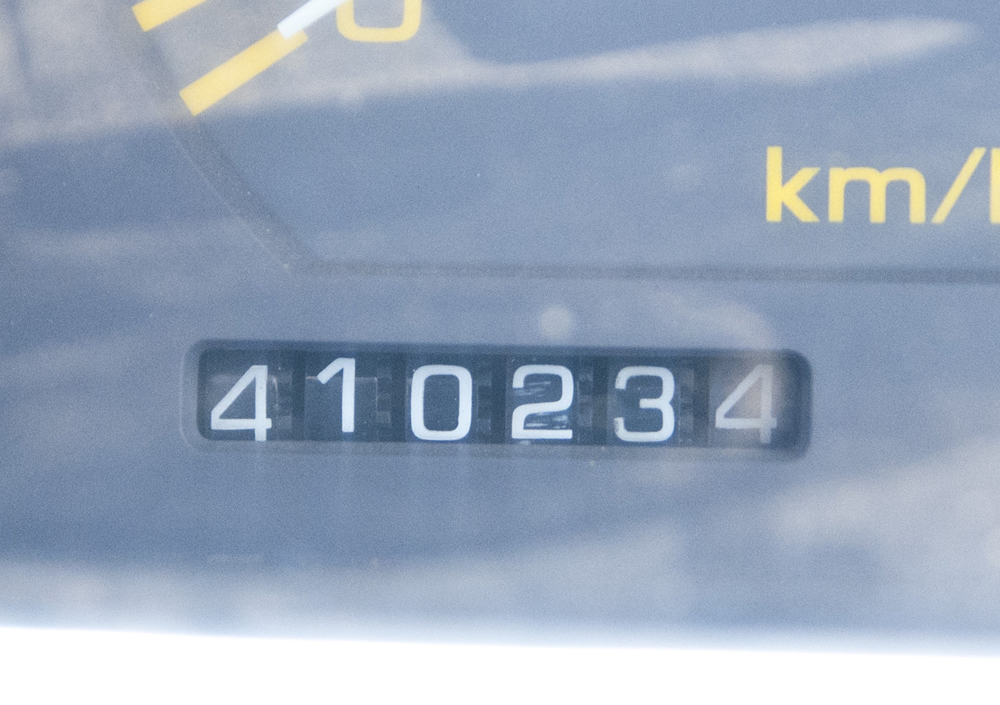 I’ll start with the good points. The Patrol starts almost every time. Almost. Last Tuesday, after I mucked around with the batteries (more on that later), it didn’t have enough juice to kick over and at the same time it got an air lock in the fuel line. Fortunately, this isn’t the first time it has happened (it’s the third), so a bit of compressed air into the fuel tank and cracking the fuel line near the engine fixed that easily. Paul, a bloke we met in the caravan park gave me the jump I needed to get started. Despite that, the engine has been next to faultless. I uses a bit of oil (but only 1L per 5000km), starts to get hot when we use the air-con (but all the windows still wind, so that’s all good) and squeaks a little around the belts, but I can happily ignore all of that.

Now for the bad stuff. 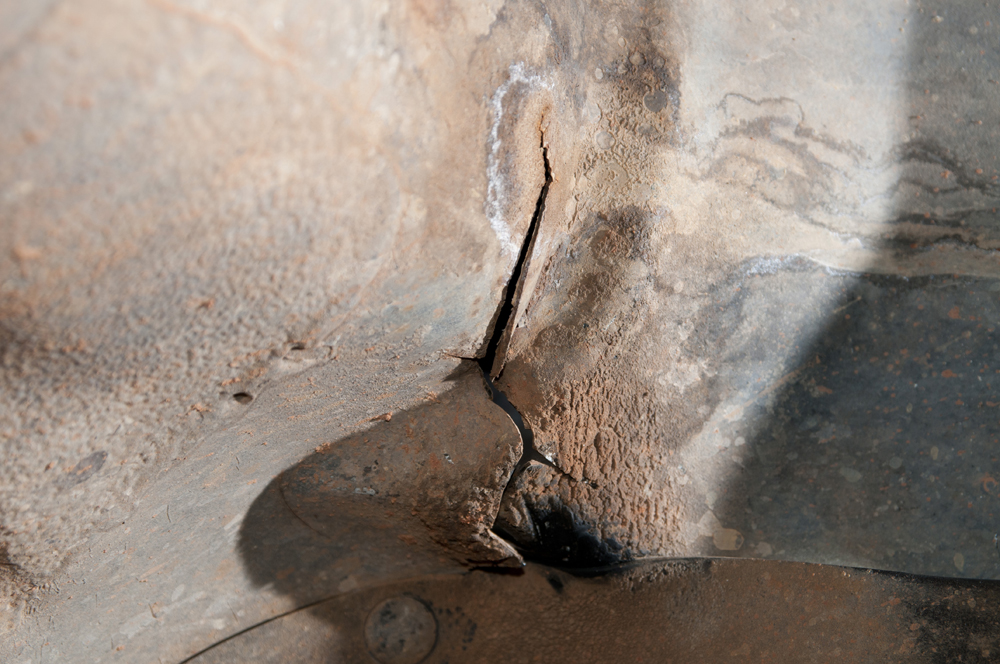 Got crack? This is what four or five thousand kilometres of corrugations can do to a car. 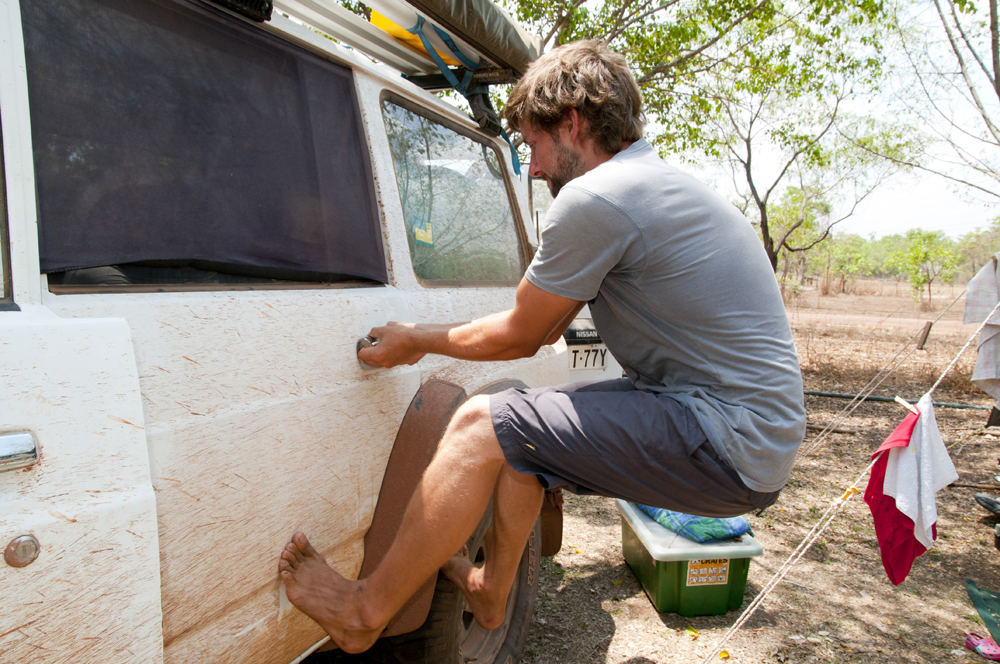 Umm, are you sure it is even unlocked?

The front, passenger door hinge used to get so gunked up with mud and grime, that it wouldn’t close unless you applied all your weight to it. Then a spring fell out and part of the hinge pierced the bodywork leaving a gaping hole, but the door closes fine now, so I guess we win. My door is fine. 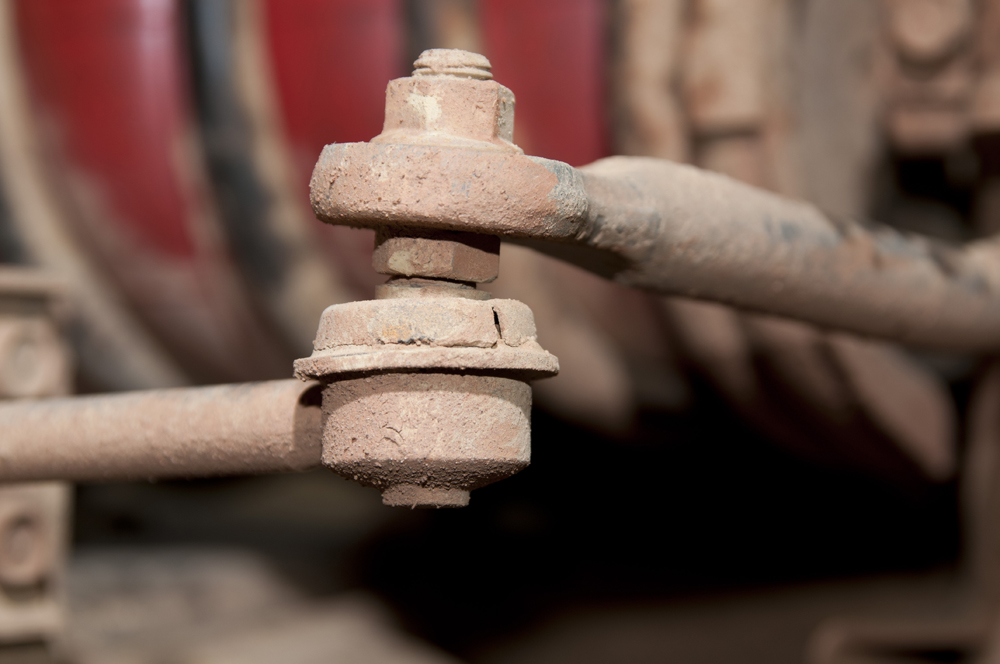 One of the rear sway bar bushes showing a bit of wear, even through all the mud. 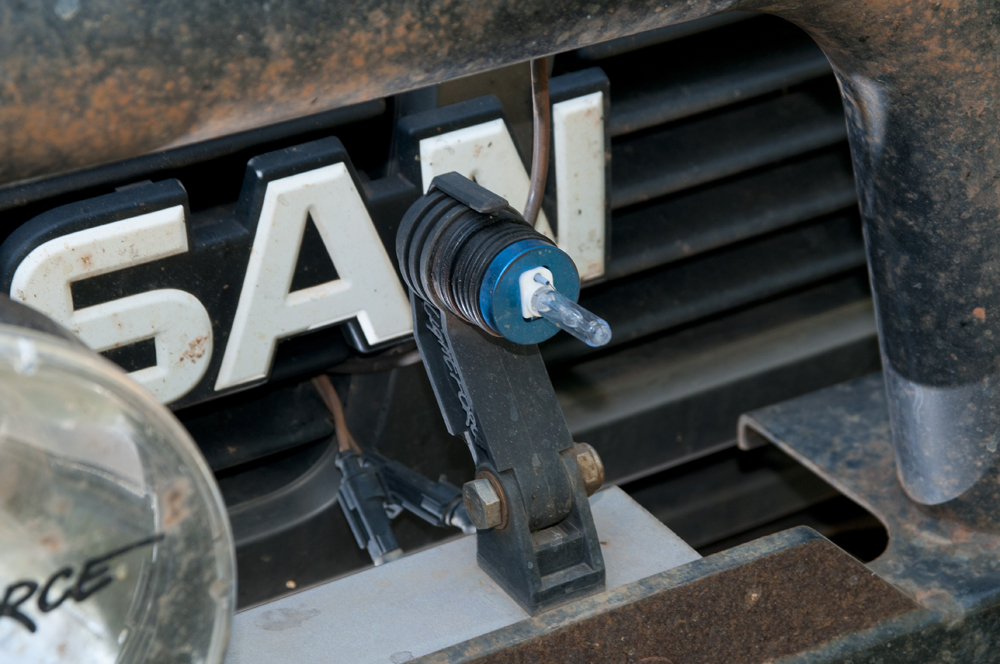 Seriously, I don't even know how this could have come off.

Tyres: These tyres were fitted not long after I bought the Patrol and have done nearly 60000km. Not bad lift for a set of rubber, and they are still a couple of millimetres from the wear indicators, so I am hoping they will do another 10000km and get us home (and through rego). It’s a bit touch and go really. 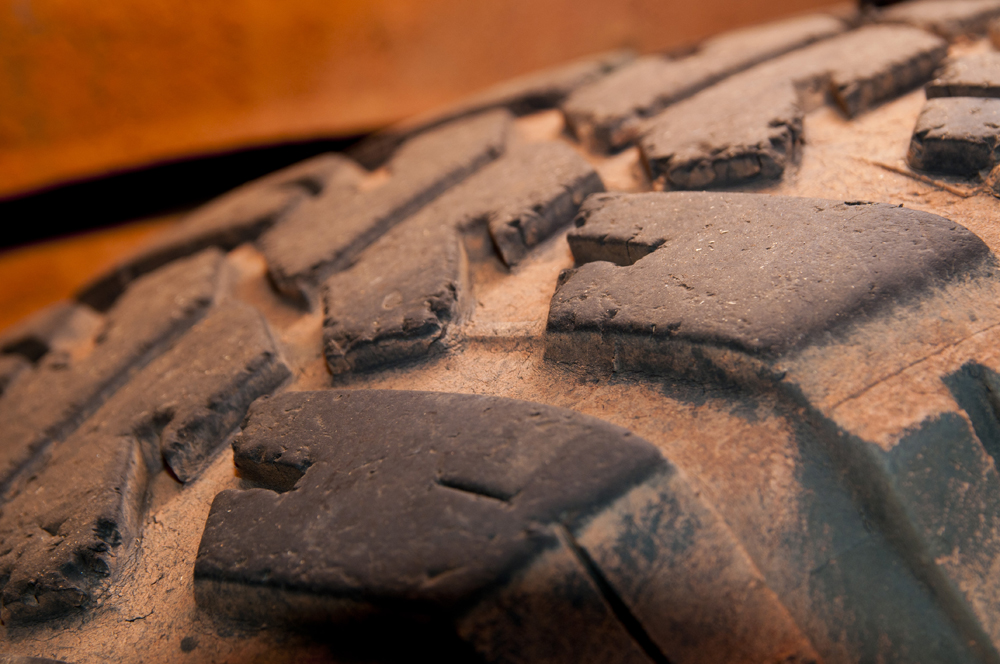 These went on at 345000km, so they have had a pretty impressive life. By my estimation, they have done over 15000 of those kilometres on dirt and corrugations.

The inverter, already old when I fitted it, has nearly shaken itself to bits. The inverter changes the 12V power from our battery into 240V power for charging laptops. We are never sure if it will decide to work though. Sometimes it is fine, sometimes it just won’t turn on, other times it will turn on, but overloads itself and squeals like a little girl until we turn it off. It’s like a game. 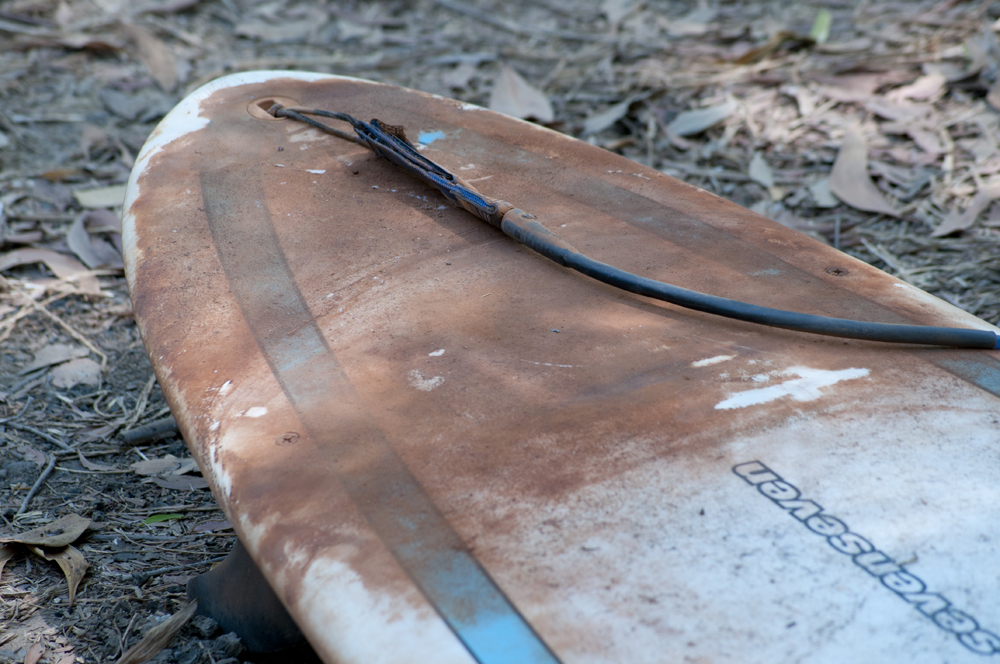 Check out the custom paint job on my surfboard. The combination of old wax, hot weather and heaps of dust made that nearly impossible to get off.

Our camp table I have had for years now, and is a piece of plywood with some trestle legs screwed to it. I use the term screwed lightly, because most of them are loose and only gravity really holds it all together.

I am up to hammer number three, having broken two already, constantly hammering in tent pegs. Note to self, spend more than $6 on hammers.

I have fixed our camp light twice now and used bits from our other one to fix it.

We have broken one fishing rod (stepped on it), lost an estimated $100 worth of fishing gear and crab traps to snags, trees and (fortunately) some fish. I have found a few lures though, climbing trees retrieving our own, so that goes some way in making up for it. 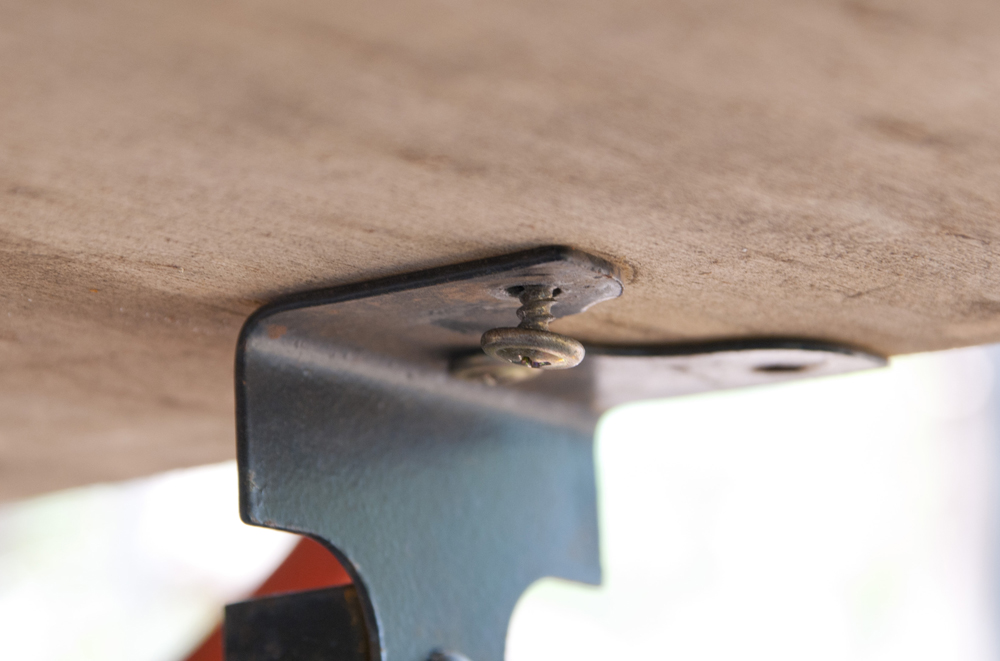 This photo is slightly doctored. That screw was all the way in before I took the shot, but I was able to use my fingers to unscrew it.

I am pretty sure that sums up the wear and tear situation, so I suppose we are pretty fortunate. We have met people doing much shorter trips in much better prepared and more expensive 4WDs who have had more problems. We really only have God to thank for the Patrol’s continued faithful service, because it certainly should have packed it in a lot earlier. Before we left, Andrew Barry asked how I thought the car would hold up, and I told him, “I don’t expect it to be worth much when we get back.” I suppose monetarily it won’t, but we still love it.