We make this post from the remote, dangerous and uncharted Gold Coast (http://fms.ws/4nqYT), but a lot has happened since our last update. We left Crescent Head after submitting my assignment and for the first time this trip locked in the hubs and put the Patrol in 4WD. About two or three kilometres up the road from Crescent, you can jump onto Killick Beach at Richardson’s Crossing. After a quick call to Dad, getting him to check the tide was on its way out and not in, as we would have nearly 50km of beach to cover before our next stop. 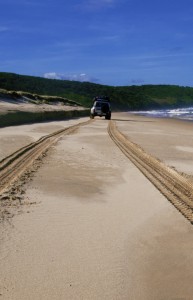 Killick Beach is long and exposed with large drop offs in the sand from recent storms. It wasn’t exactly tough going, but the Patrol definately worked for its keep along that soft beach, even below the high tide line, which would generally be a little easier to drive on. Interestingly becasue of half the beach being washed away, along some sections we couldn’t help driving right by the waters edge.

A cool shot out the window at Smokey Beach. There was an eagle perched on the driftwood, but we scared it away

The beach takes you to Hat Head National Park and the Hungry Gate campsite, a site we have stayed at before, but bypassed this time. After about three or four kilometers of dirt and bitumen we jumped back on to Smokey Beach, heading up to South West Rocks. A little more protected by the Chinamans hat shaped head, Smokey beach was a much easier drive, so easy, I didn’t realise the Patrol had been in two-wheel drive for the whole thing until we got to the end and went to change into low range.

Smokey Cape, originally named by Captain Cook who saw smoke rising from it when he sailed past in 1770, has it’s own campsite where we we set up camp for a couple of days. Relatively cheap for a National Parks and Wildlife Services managed campsite at only $5 a night (remember this number), plus $7 for the Patrol (why does it cost more, it didn’t even use the toilets?) we were happy to empty 140 five cent coins into the honesty box as payment. The envelope didn’t fit into the honesty box, it ripped and they all fell in, so hopefully the NPWS Ranger worked it all out. 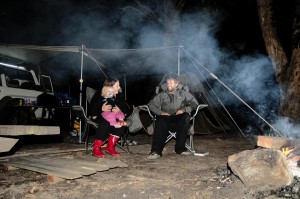 Our camp at Smokey Cape

We made a couple of excursions from camp, one a 4km walk with a pram, up a particuarly steep hill to check out the lighthouse. When we got up there, we discovered it was just like every other lighthouse we have been to, and the lookout was blocked by overgrown trees. Back at camp I got a fire going, while the girls had a nap (yeah, that’s right, a nap is the exciting adventures you want to read about), but it was our first proper camp fire for the trip and I at least was pretty excited. Unfortunately later that night I got caught up writing the last post <a href=”http://www.battytales.com/wordpress/?p=115“> and it went out. 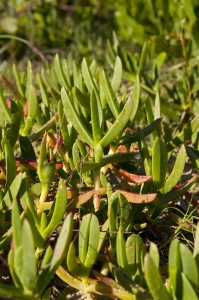 This is Pig Face, you can boil it up like spinnach and eat it. 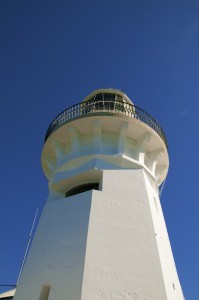 The next day we packed up early(ish) and headed into South West Rock Anglican Church, number one of fifty two, where we made up more than 10% of the congregation. But more on that in another post. We lunched in SW Rocks and I wondered what it was south-west of, being on the east coast and all, but Trial Bay has a westward facing beach, so maybe that has something to do with it. We visited Trial Bay Gaol, a gaol built by prisoners who later failed to build a breakwall across the bay in a government initative to make the bay a safe haven from southerly storms that sunk a whole bunch of ships travelling between Sydney and Brisvegas. Later it became a camp for intered German Australians who the government was scared of during WWII. They rounded up every German they could find and packed them in there until the war finished. Over 500 of them in a jail built for about 250. Fun times. 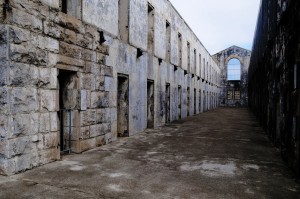 Cell Block A at the Trial Bay Gaol

It doesn't look so hard to escape from if you ask us.

We could have stayed at Trial Bay campsite, but at fifty something dollars a night for a campsite, we decided to head further up the coast and ended up at Iluka and the Woody Head campground (http://fms.ws/4lePG), the most expensive place we hope to stay at. At $35 a night (for a campsite mind you), I wish I had enquired the price before I confirmed our booking. Still, it was a really nice place and River had a lot of fun exploring our campsite, the beach and playing, fully dressed in the water. We spent two nights there and used as much of the supplied firewood we could in an effort to get our moneys worth. 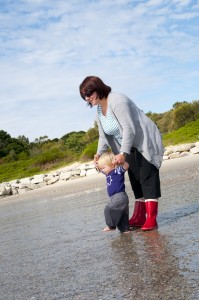 River, playing in the surf wearing trackies and a long sleeve shirt

After two nights we packed up there and made our way to Byron Bay the first place on our (Brendan’s) list of places we definately had to visit. Cape Byron (http://fms.ws/4mRni) is the eastern most point of the Australian mainland and wanting to visit the four compass points of our country, Cape Byron (East), Cape York (North), Steep Point (West) and the appropriatly named South Point on Wilsons Prom in Victoria. 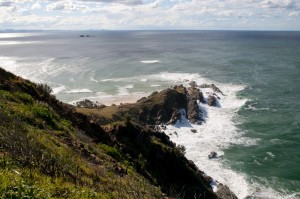 Not quite realising how far and steep the walk was from the carpark, I carried River the two and a bit kilometres to the point and back. In our haste though, we forgot to take our Spot Messenger and I had to go back later that night to log our position. 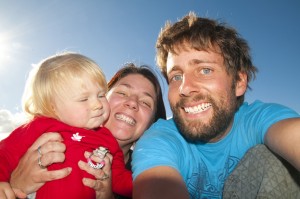 Brendan, Angela and River at the eastern most point of Aus. Not that you could tell though, becasue all you can see behind us is sky

After the walk, I was desperate to surf the Pass, Byron Bays most popular wave – and popular for a reason. With about 50 or so guys out on the 1ft or so break (that was still peeling for a few hundred metres down the beach) I wasn’t particuarly suprised when another surfer muffed his duckdive and landed on my head.

Byron Bay's "the Pass" at sunset

Despite the crowd though and the small surf, I give the Pass a huge thumbs up. Easily one of the most fun right handers I have ever surfed and I would battle the crowds again in an instant. I surfed here until the sun went down and even walking back to the car in the fading light, guys were still paddling out hoping to beat the crowds by surfing at night. While I was out in the water, River was having a ball being dragged around the sand on our picnic rug, but as soon as Angela got too close to the water, River decided she wanted to have a swim. 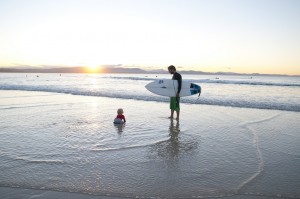 "Dad, can I borrow your board, the surf is pumping" is what she was trying to say to me.

It being late, accomodation expensive and us less than an hour from Dave and Viv’s, Angela’s parents place, we ended our first NSW leg of the trip and slept in a real bed that night. The first two weeks over, looking back it feels like we have been away for a year already, although I say that with no note of complaint or regret. As we get used to this new life, the first two weeks have been fun, tiring, frustrating in parts (as we worked out how best to pack the Patrol), enlightening, but most of all exciting. We don’t know where this trip will take us, but we can only thank God for the opportunity. As we spend next week on the Goldie, making some improvements to the Patrol, learnt from two weeks experience we can’t wait to get back on the road. For Angela at least, this hasn’t felt like the big adventure it is, as we hadn’t left the comfort of familiarity (still being in our own state and knowing we were heading to Angela’s parents). For River, she is finally getting used to life outdoors after a tempremental first week or so, and for Brendan, he is just happy not to have to go to work tomorrow.