I’d like to begin this post with a question, (but instead I started it with a statement). Does anyone in Crescent Head work or go to school? After Point P, we headed up the coast a little further and stopped in at Crescent Head to stock up on supplies. We pulled in around midday and the place was awash with youths just hanging around. I patiently trailed Angela as she made us do the shopping before I was allowed to check out the surf. That over and done with, we headed down to the crescent shaped head to check the famous wave.

No, the dude doing the mad top turn was not Brendan

Famous it must be, because at 3ft on a weekday, there is about 50 guys out. Still watching a wave break for a couple of hundred metres down the point was too much to take and I unstrapped the board and followed a bloke who looked local to the place you jump in. This time I managed to get in the water incident free. Yay me. Not long after this however, one of my questions was answered when a bus load full of groms turned up for school sport and added another 20 or so locals to the already crowded line up. Still, a couple of waves later and one all the way into the beach, I could tick Crescent off the list.

We headed back down the coast to a campground interestingly named Delicate Nobby after the area’s most notable landmark. With plans to stay there a couple of nights, we set up in the only patch of grass (we use grass as a more general than literal term) left. The site, a popular destination for retired fisho’s was pretty packed out, but it was cheap, sitting between two National Parks, but not actually in one. After having a chat to one of the fisho’s on the beach, it had been pretty quiet on the catch front, so most of them were just sittin’ around enjoying the time in the bush.

The next day dawned sunny but cold, with the start of what was to be and still is, almost constant cold sou’westerlies. With some brekky in out tummies though, we headed down to the beach for a surf and play in the sand… only to find 50 guys out! Seriously, who expects to walk onto a beach almost no one has heard of, down a dirt road from any of the nearest towns to find a surf school hogging the best bank! I went out anyway and thanks to the fact most of them were happy to muck around in the white-wash, I may as well have had the place to myself anyway.

This is what we walked onto the beach to find

That arvo, I did something I have never done before – paddled out for a surf on a deserted beach by myself. I have surfed my share of empty waves, but normally I would be with someone I knew or there were other guys out. Even if it was only 2ft or so, it was a tad scary. There is a whole lot of ocean behind me and no one would ever find my body. Or so I kept telling myself. In reality, I could paddle for any wave I wanted and when I looked like the kook I really am, no one was there to see it, so it wasnt that bad. I came in after only 30 minutes though.

With our batteries going flat and not enough clear sky for the solar panels to be of much use, we headed into Crescent Head again a booked in a night at the caravan park. I had a uni-assignment due the next day, so needed the convenience of internet and phone reception, considering I hadn’t even started it. I probably even dedicated a whole hour to it that arvo before I paddled out on the 7’7″ for an evening session in an reasonably uncrowded break. For those who know of my ‘list of things to do’ of which is included go viral on the internet and write a song that makes it into the Triple J Hottest 100, I managed to tick another thing off the list. I managed to paddle out, catch a handful of waves, (a couple all the way into the beach, one where I ended up on the rocks) and not get my hair wet. It doesn’t get much better than that. 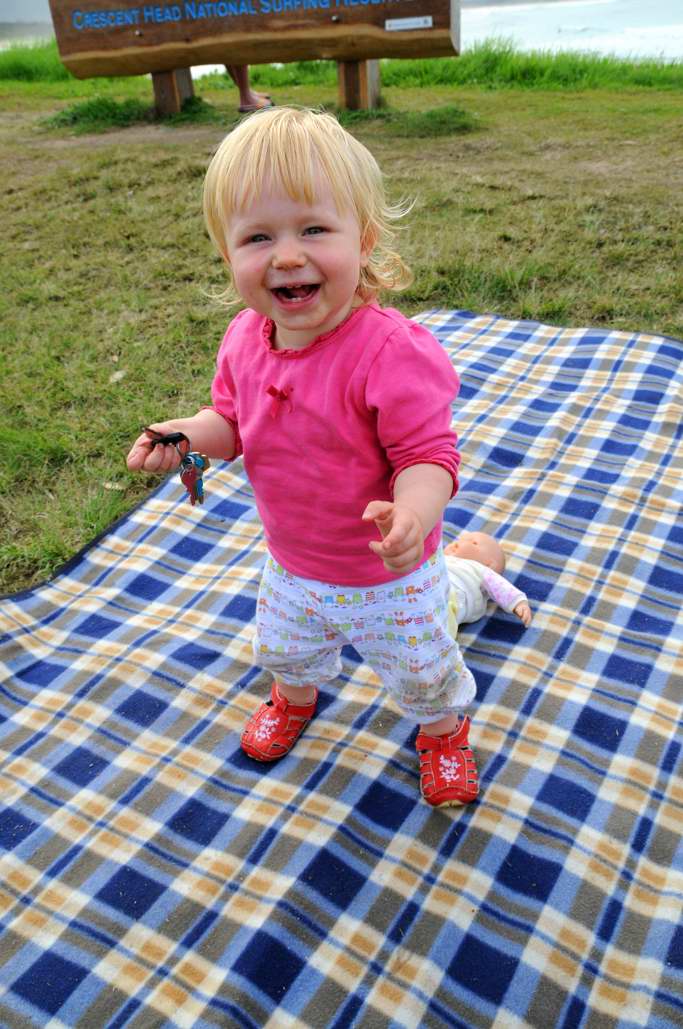 Look who can stand all by herself

While we were there, River learnt to stand up herself and in breaking news, has taken her first (three) steps since, but more on that in our next post (and if we can managed it, a video). I even managed to finish my assignement (that’s two for this trip already) and submit it hours before the deadline. Currently we are camped on Smokey Cape, planning to leave tomorrow after stopping in at the local church.

Check out the pics