Not sure if you worked it out or not, but our return trip to Sydney wasnt just for the pure pleasure of seeing all our friends again. We had some very important business to attend to which included the wedding of [...]

As mentioned by Brendan, we finally made it to the tip of our great country. While it wasnt exactly a life changing event, the experience of getting there and back again has certainly had quite an effect on our little [...]

The Batty’s are coming home early! It’s not all bad news though. Angela went and got herself pregnant, so we have to cut our trip short by a few months. She is 11 weeks in, so due around April. Our last [...]

If there was ever a place in Australia that you thought you wouldn’t have to worry about the availability of a car park, the most northern tip of the Australian mainland would be it. but allas, as we pulled up [...] 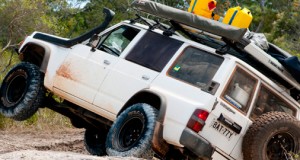 You hear so many stories of woe coming from Cape York. While we were in Lakefield National Park, we met a group of 4WDers who were on their way south. Coming through a dip in the road, one of the [...]

It has been just over 13 weeks since we left Sydney and not since then have I felt the same sense of anticipation as the day we drove north out of Cairns. With the Big C finally in our rear-vision, [...]

Editors Note: I wrote this post about a week and a half ago, but after a few user issues and then technical frustrations, it got deleted three times before I could post it. As such, some of the info is [...]

Ah, that’s better! A power point and full reception! You Beauty! As I mentioned in our last post, we had decided to make camp in the Byfield National Park, along 9 Mile Beach. That is if you can really call [...]

That was the main advertisement for Lake Awoonga Caravan Park, which as mentioned by Brendan was where we made our home for the next week of our trip. Brendan was a bit hesitant at first, I mean who wants to [...]

For the first couple of nights we stayed at “The Pacific View” on Kings Beach, I had trouble getting to sleep because my bed was level. It’s funny how you get used to some things, even after only five or [...]